Flink From beginner to proficient series of article

After trying federation and Remote Write, we finally chose Thanos as the monitoring companion component and used its global view to manage our multi-regional, 300+ cluster monitoring data. This article mainly introduces the use and experience of some components of Thanos.

+ federation will still encounter some problems, the essential reason is that Prometheus’ local storage does not have data synchronization capabilities, and it is difficult to maintain data consistency under the premise of ensuring availability, and the basic multi-copy proxy cannot meet the requirements, such as:

At present, most of Prometheus’ clustering solutions ensure data consistency from two perspectives:

> Storage angle: If you use Remote Write remote storage, A and B can be followed by an adapter, Adapter as the main logic, only one copy of data can be pushed to TSDB, which can ensure that one abnormality, the other can also be pushed successfully, the data is not lost, and there is only one remote storage, which is shared data. The solution can refer

to the storage angle of this article

As our cluster grows larger, the types and amounts of monitoring data also increase: such as Master/Node machine monitoring, process monitoring, performance monitoring of the 4 core components, POD resource monitoring, kube-stats-metrics, K8S events monitoring, plugin monitoring, and so on. In addition to solving the above high availability problem, we also want to build a global view based on Prometheus, the main requirements are:

> Long-term storage: Data storage for about 1 month may add dozens of gigabytes every day, and it is hoped that the maintenance cost of storage is small enough to have disaster recovery and migration. Influxdb was considered, but Influxdb did not have an existing clustering solution and required human maintenance. It is best to store TSDB or object storage or file storage on the cloud.

Studied a large number of open source solutions (Cortex/Thanos/Victoria/StackDriver.). After commercial products, we chose Thanos, to be precise, Thanos is just a monitoring suite, combined with native Prometheus, to meet the needs of long-term storage + unlimited expansion + global view + non-intrusive. 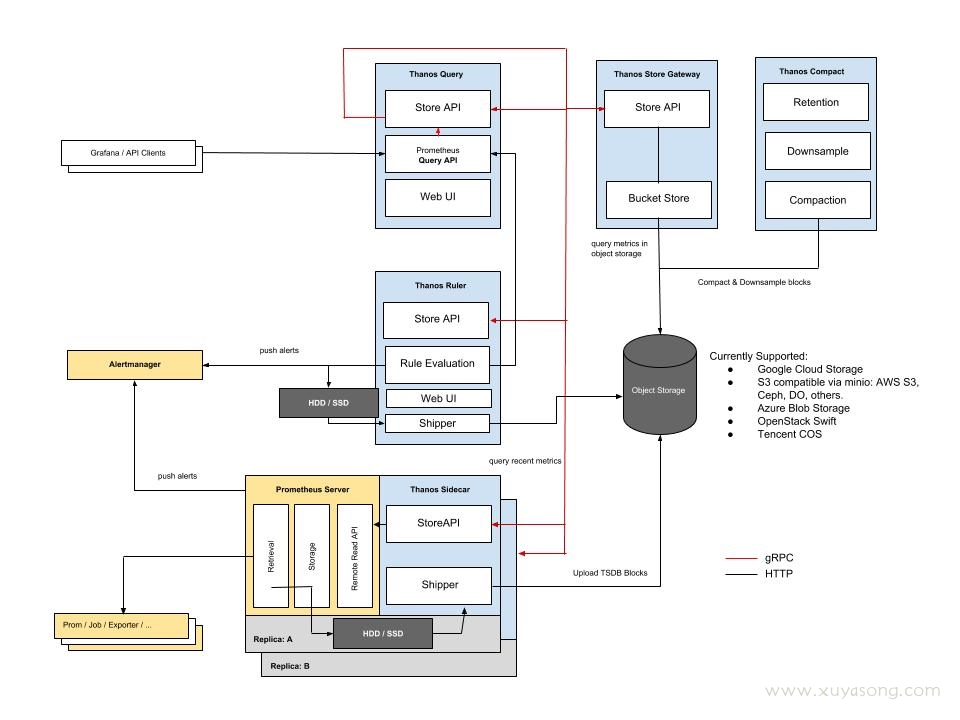 In addition to this sidecar approach, Thanos has a less commonly used receive pattern, which will be mentioned later.
Thanos is a set of components that can be seen on the official website including:

addition to the official mentioned these,

actually has:
It seems that there are many components, but in fact, there is only one binary when deployed, which is very convenient. Just with different parameters to achieve different functions, such as the query component is ./thanos query, the sidecar component is ./thanos sidecar, the component is all in one, there is only one copy of the code, and the volume is very small.
In fact, the core sidecar + query can already run, other components are just to achieve more functions

The latest version of Thanos is downloaded here for release,

for Thanos, which is still fixing bugs and iterating on the function, do not use the old one if there is a new version.

The following will introduce how to combine Thanos components to quickly achieve your Prometheus high availability, because it is a quick introduction, and the official quick start is part of the same, but will give the recommended configuration, and this article as of the 2020.1 version, I don’t know what Thanos will iterate into in the future

Step 1: Confirm that you already have Prometheus

thanos is non-intrusive, just the upper suite, so you still need to deploy your Prometheus, no more details here, by default you already have a stand-alone Prometheus running, it can be a pod or a host deployment, depending on your operating environment, we are outside the k8s cluster, so it is a host deployment. Prometheus collects monitoring data for Region A. Your Prometheus configuration can be

web.enable-lifecycle must be turned on, for hot load to reload your configuration, retention is reserved for 2 hours, Prometheus will generate a block by default 2 hours, Thanos will upload this block to object storage.

Here you need to declare the external_labels and mark your region. If you are running with multiple replicas, you need to declare your replica identity, such as 0, 1, 2 Three replicas collect exactly the same data, and the other 2 Prometheus can run at the same time, but the replica value is different. The configuration here is similar to the official Federation scheme.
Requirements for Prometheus:

> It implements Thanos’ Store API using Prometheus’ Remote Read API. This allows the Query component, described later, to treat the Prometheus server as another source of time series data without having to interact directly with the Prometheus API (which is the blocking role of Sidecar

Of course, this does not mean that Prometheus can

be completely stateless, because if it crashes and restarts, you will lose 2 hours of metrics, but if your Prometheus is also multi-replica, you can reduce the risk of this 2h of data.
Sidecar configuration:
Configuration is simple, just declare Prometheus.url and data addresses. objstore.config-file is optional. If you want to store data in object storage (which is also recommended), configure the account information of the object storage.
Thanos supports Google Cloud/AWS by default, taking Google Cloud as an example, the configuration is as follows: