The author is David Kjerrumgaard, currently a contributor to Splunk, Apache Pulsar, and Apache NiFi projects. The translator is Sijia@StreamNative. Original link: https://searchdatamanagement.techtarget.com/post/Apache-Pulsar-vs-Kafka-and-other-data-processing-technologies, the translation is authorized.

Apache Pulsar’s multi-tier architecture completely decouples the message service layer from the storage layer, allowing each tier to scale independently. Traditional distributed data processing middleware (e.g., Hadoop, Spark) processes and stores data on the same cluster node/instance. This design can reduce the amount of data transmitted through the network, making the architecture simpler and improving performance, but at the same time, scalability, elasticity, and O&M are affected.

the service layer from the storage layer An

architecture that decouples the service layer from the storage layer has many advantages. First, the layers can be elastically scaled without affecting each other. With the elasticity of environments such as clouds and containers, layers can automatically scale up and down to dynamically adapt to traffic spikes. Second, system availability and manageability are improved by significantly reducing the complexity of cluster scaling and upgrading. Again, this design is container-friendly, making Pulsar the best solution for hosting cloud-native streaming systems. Apache Pulsar uses the highly scalable BookKeeper as the storage layer, which implements strong durability assurance and distributed data storage and replication, and natively supports cross-region replication.

Pulsar vs. Kafka Both Apache

and Apache Kafka share similar messaging concepts. The client interacts with both through topics, which are logically divided into partitions. In general, the infinite stream of data written to a topic is divided into partitions (groups of a specific number and equal size) so that the data is evenly distributed across the system and used by multiple clients simultaneously.

The essential difference between Apache Pulsar and Apache Kafka is the infrastructure of the bucket. Apache Kafka is a partitioned-based publish/subscribe system designed to operate as a monolithic architecture, with the service and storage layers on the same node.

storage: In Kafka based on partitioning, partitioned

is stored as a single contiguous data store on the leader node, and then replicated on the replica node (replica nodes can be preconfigured) to achieve multiple copies of the data. This design limits the capacity of the partition in two ways and expands the topic. First, because partitions can only be stored on local disks, the partition size depends on the largest single disk size on the host (the disk size of the “new” installation user is about 4 TB); Second, because data must be replicated, the size of the partition cannot exceed the minimum disk space on the replica node.

assumes that the leader can be stored on a new node with a disk size of 4 TB and partitioned storage only, with both replica nodes having a storage capacity of 1 TB. After publishing 1 TB of data to a topic, Kafka detects that the replica node can no longer receive data and cannot continue to publish messages to the topic until the replica node frees up space (Figure 3). If the producer fails to buffer messages during an outage, data loss may result.

Faced with this problem, there are two solutions: delete the data on disk, store the existing replica nodes, but because the data from other topics may not have been consumed, it may cause data loss; Or add new nodes to your Kafka cluster and “rebalance” the partitions to use the new nodes as replica nodes. However, this requires re-replicating the entire 1 TB partition, which is time-consuming, error-prone, and costly in terms of network bandwidth and disk IO. In addition, offline replication scenarios are not desirable for programs with strict SLAs.

With Kafka, partition data needs to be rereplicated not only when scaling the cluster, but also other failures, such as replica failures, disk failures, machine failures, and so on. If there is no failure in production, we often overlook this drawback of Kafka. 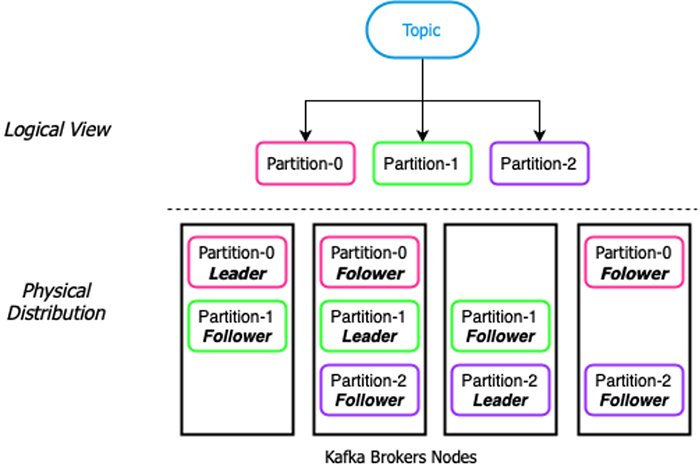 shard-based storage architecture, such as that used by Apache Pulsar, partitions are further divided into shards that can be rolled over based on pre-configured time or size. Shards are evenly distributed in the bookie of the storage layer to achieve multiple copies and expansion of data.

When bookie runs out of disk space and can’t continue writing to it, Kafka needs to rereplicate data, how does Pulsar deal with this scenario? Since the partitions are further fragmented, there is no need to copy the contents of the entire bookie into the new bookie. Until a new bookie is added, Pulsar can continue to receive new data shards and write to bookie where the storage capacity is not full. When you add a new bookie, traffic on the new node and the new partition automatically increases immediately, eliminating the need to re-replicate old data. 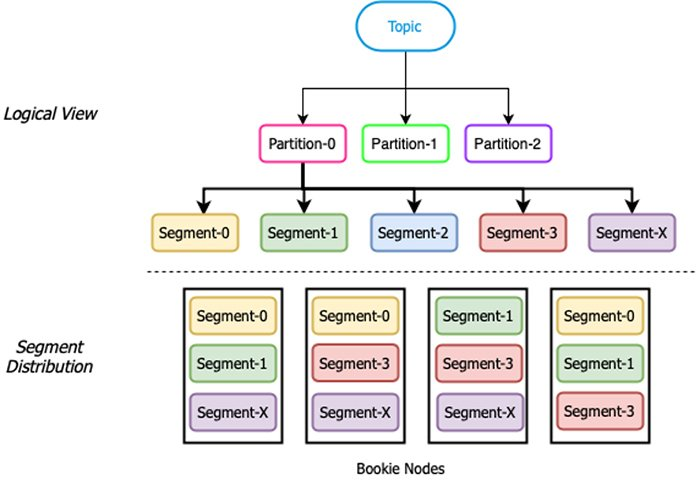 is shown in Figure 5, where message shards 4-7 are routed to other active bookie when the 4th bookie node no longer continues to receive new message shards. After the new bookie is added, the shards are automatically routed to the new bookie. Throughout the process, Pulsar is always running and can serve producers and consumers. In this case, Pulsar’s storage system is more flexible and highly scalable.