: Click “Read Original.” Article” for FFA 2021 Summit materials~
At Flink Forward Asia 2020 , our team shared topic
As shown in the figure above, when the writer writes an event, the reader needs to deserialize such an event with the same schema in order to get accurate data from binary. Some sensitive information may even be further protected by encryption coding on top of metadata.
We need to have a centralized schema metadata for Pravega’s stream, including storage in encoding formats, which can be written and defined by writers, and then all readers can read them. Obtain the structure and anti-sequence method of the data to reach a consensus on the schema.
We also hope that this metadata storage can not rely on an additional component, and it is best to take advantage of Pravega itself, which not only saves the cost of operation, but also takes advantage of Pravega’s own efficient and persistent storage features.
Further, a very common business scenario is schema changes. In the same stream, as the business expands, the half-structured data written may introduce new or change some fields to support more business processes and jobs. This is also compatible with many format standards, such as Avro. Specifically, when another writer writes data to the new schema, we not only need to ensure that the reader on the original wire can continue to work, but also support the reading of the data for the new reader that needs to use the new field. Therefore, the existence of the Pravega Schema Registry is best to ensure that there is no need to wait for the reader to actually try to deserialize to learn of the change, but to configure format compatibility on the write side and do some intervention when registering a new schema, so that some management of read and write client applications can be carried out more quickly.

Based on these motivations, we developed a project like Pravega Schema Registry.
It is a schema for storing and managing semi-structured data in Pravega, and then also provides a RESTful interface to manage the stored schema, the encoding format of the data, and the compatibility policy. The interface abstraction we provide is very open, not only built-in Avro, protobuf, json and other common serialization formats, lz4, snappy and other common compression algorithms, but also support some custom serialization methods. This abstraction is a more versatile solution than some other similar projects in the industry. In all serialization management, we can customize the corresponding encoding format and compatibility policy, so that users can freely use any serialization method to process data. The entire project is stored using the functionality of Pravega Key Value Table, which is the underlying implementation of the Schema Registry. Pravega Key Value Table was only one of Pravega’s internal metadata storage components, but slowly we developed a public API that became public in version 0.8 and entered a stable beta version in version 0.10.
The Pravega Schema Registry project also maintains relative independence, except for the underlying implementation using the Pravega key value table, all the abstractions at the top are independent and not limited to Pravega, and the entire project is not open source within Pravega, but as a separate project in the ecology. This allows for more general-purpose storage systems, including common file and object storage, as a schema-managed solution.

system architecture of the whole project is shown in the figure. 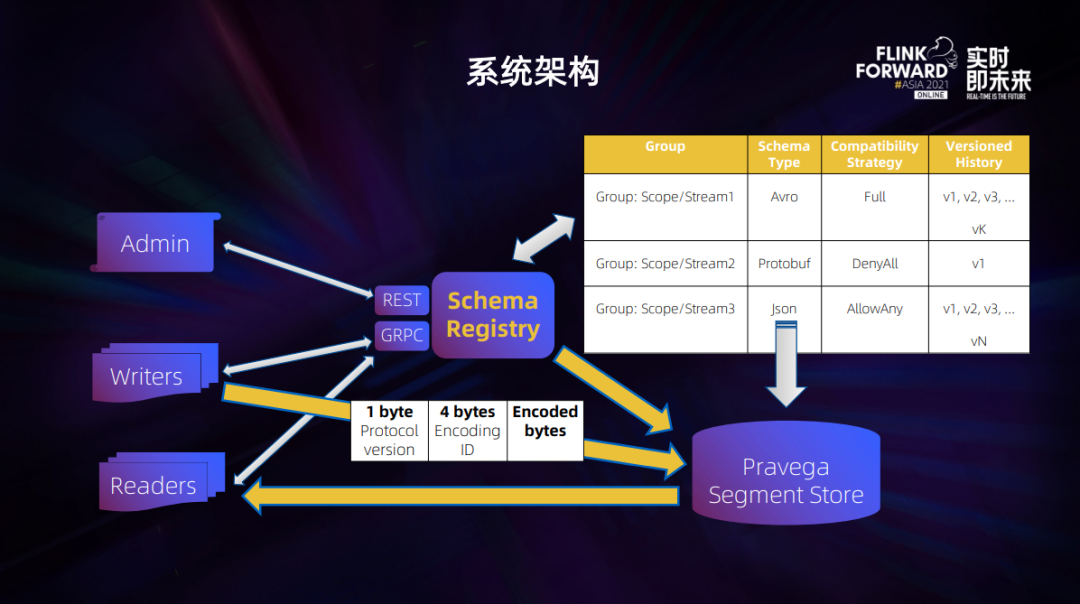 The Schema Registry can interact with clients through RESTful APIs as well as the GRPC protocol. Group corresponds to a schema-managed unit, and Pravega corresponds to a Stream, which stores the default serialization format, compatibility configuration, and multi-version serialization and encoding information. As mentioned earlier, this information is stored as key-value pairs on the Pravega segment.
From the perspective of the data link, the write side needs to use a special event serialization method with header bytes with protocol version and encoding id, so that the Schema Registry can step in to register or verify the schema of the data to see if it meets the encoding and compatibility requirements, and then allow the schema to legally enter the Pravega stream’s storage. Similarly, the read side needs to be read with such special deserialization.

With Schema Registry, the mapping between Catalog and Pravega is more obvious. 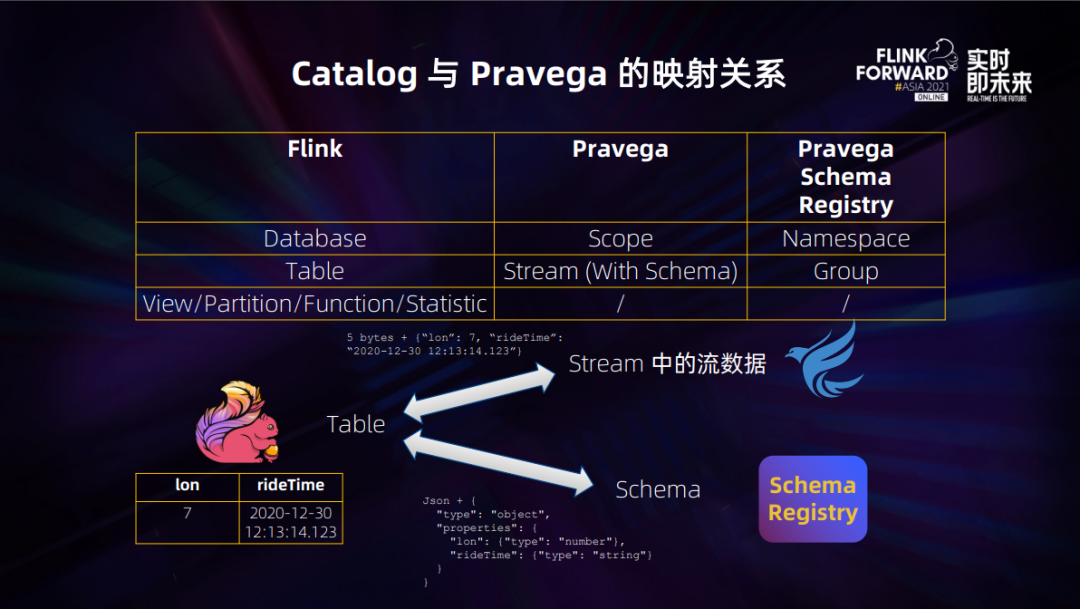 As shown in the figure, the stream data in the stream

plus the schema stored by the Schema Registry allows us to successfully deserialize and synthesize a table in Flink Catalog based on the table structure, and likewise the table-to-stream conversion can be done in the opposite link. Therefore, traditional Catalog operations such as table building, table deletion, and library deletion can be abstracted as metadata changes to Pravega and Schema Registry.
Based on this theory, we have initially implemented the catalog interface, so that users can use the following DDL to build a catalog, and use SQL to manipulate Pravega’s metadata.