Tips: Click “Read Original“ to view the original video~ Scan the code at the end of the article to follow the Pravega Maker Contest
GitHub address

welcome to give  Flink likes and sends star~ 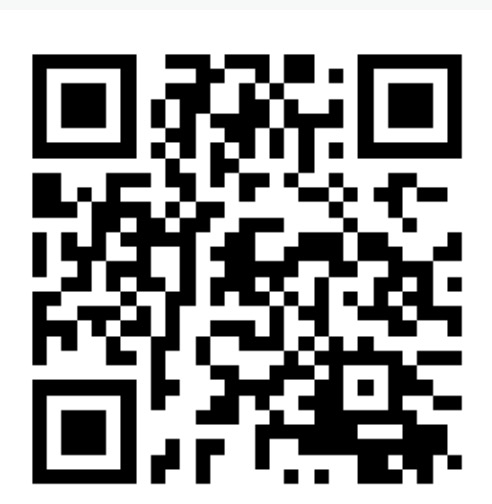 Pravega and the Pravega connector 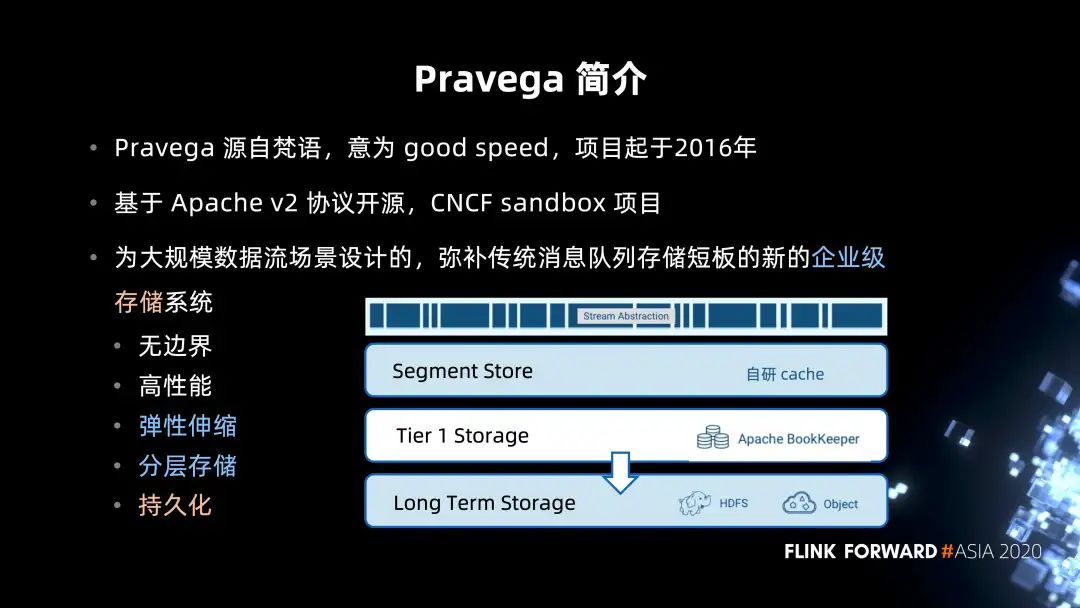 The name of the Pravega project is derived from Sanskrit, meaning good speed. The project originated in 2016, based on the Apache V2 protocol on Github, and joined the CNCF family in November 2020 as a sandbox project of CNCF.
The Pravega project is a new enterprise-class storage system designed for large-scale data streaming scenarios that complements the shortcomings of traditional Message Queuing storage. It also adds enterprise-level features to maintain boundaryless, high-performance reads and writes for streams, such as auto scaling and tiered storage, which can help enterprise users reduce the cost of use and maintenance. At the same time, we also have many years of technical precipitation in the field of storage, and can rely on the company’s commercial storage products to provide customers with persistent storage.
The above architecture diagram describes Pravega’s typical read and write scenarios, which is used to introduce Pravega terminology to help you further understand the system architecture.

The past of the Pravega Flink connector 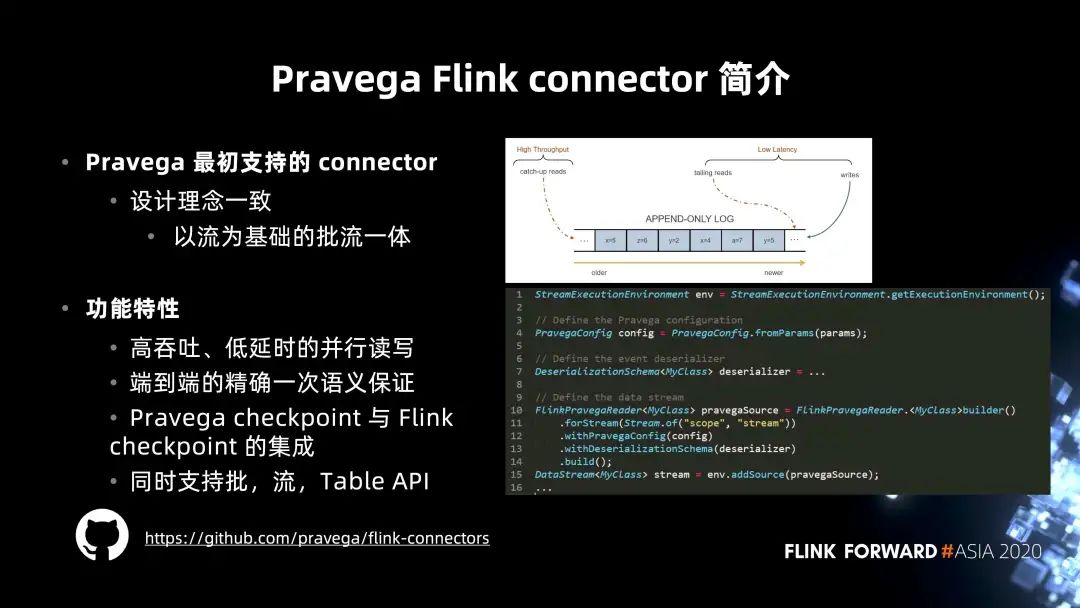 Pravega Flink connector is the connector originally supported by Pravega, also because Pravega and Flink are very consistent in their design philosophy, both are stream-based batch streaming integrated systems, capable of forming a complete solution for storage and computing. 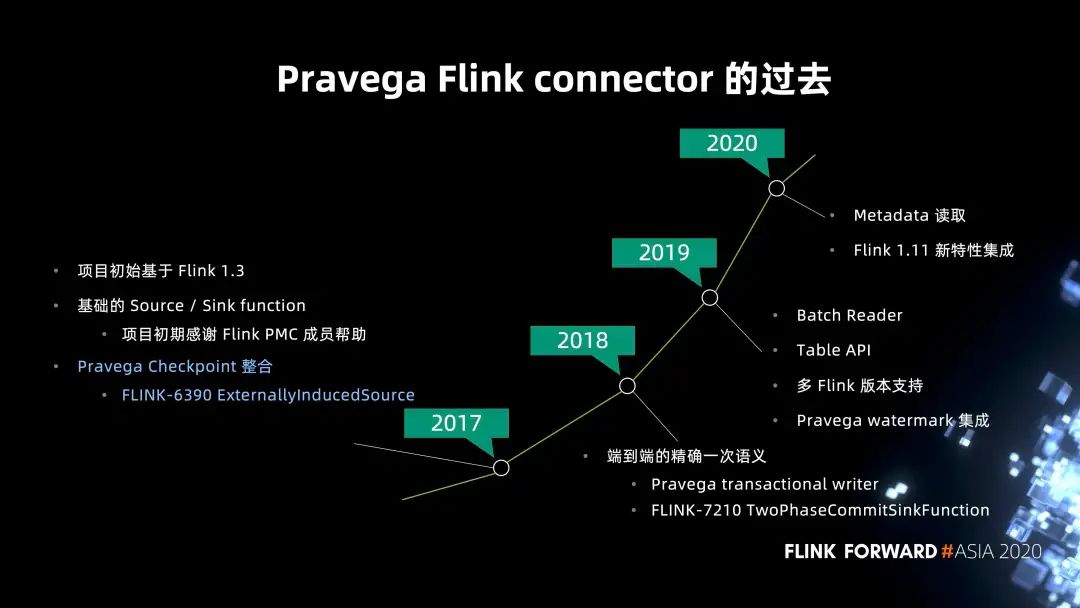 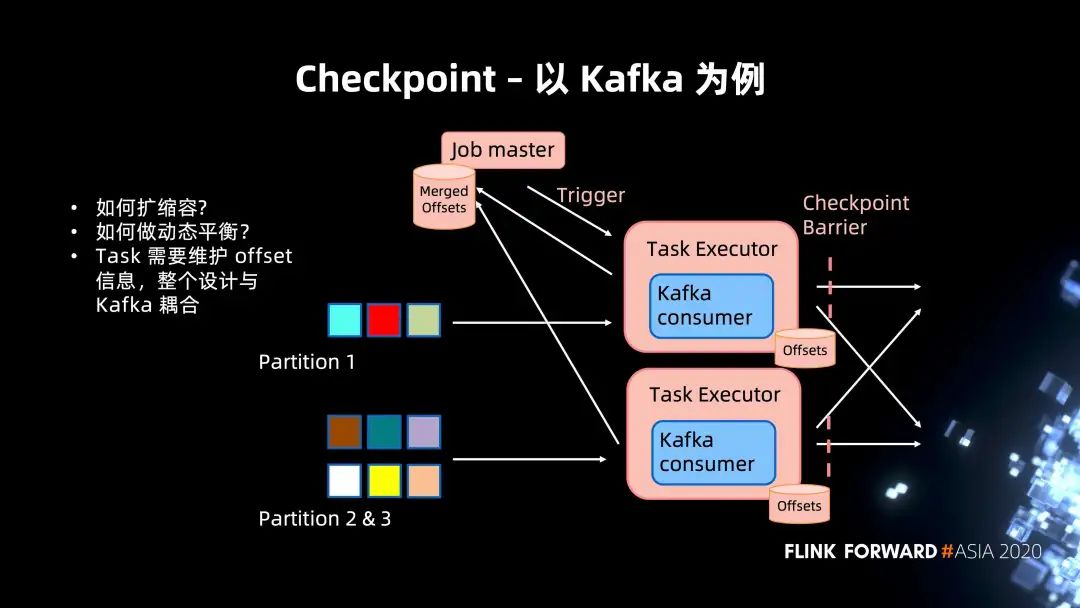 Taking Kafka as an example, let’s first look at how Kafka integrates with Flink Checkpoint.
The diagram above shows a typical Kafka “read” architecture. The Flink checkpoint implementation based on the Chandy-Lamport algorithm sends an RPC request to Task Executor when the Job master triggers a checkpoint. After receiving it, it merges the Kafka commit offset in its state store back into the Job Manager to form a Checkpoint Metadata.
After careful thinking, you can actually find some of these small problems:

> scaling and dynamic balancing support. When Partition is adjusted, or for Pravega, how to ensure the consistency of Merge when Partition is dynamically expanded and scaled in.

Based on these shortcomings, Pravega has its own in-house Checkpoint mechanism, let’s see how it integrates with Flink’s Checkpoint.
Read Pravega Stream as well. Instead of sending RPC requests to Task Executor, the Job master sends a Checkpoint request to Pravega using the interface of ExternallyInducedSource.
At the same time, Pravega uses the StateSynchronizer component to synchronize and coordinate all readers, and sends Checkpoint events between all readers. When Task Executor reads the Checkpoint Event, the entire Pravega marks the completion of the Checkpoint, and the returned Pravega Checkpoint is saved to the Job master state to complete the Checkpoint.
This implementation is actually cleaner for Flink, because it has no implementation details for coupling external systems, and the entire Checkpoint work is left to Pravega.

Third, review the high-end features of Flink 1.11 to share

Flink 1.11 is an important release in 2020, and there are actually many challenges for the connector, mainly focusing on the implementation of two FLIPs: FLIP-27 and FLIP-95. The team also spent a lot of time integrating these two new features, and encountered some issues and challenges along the way. Let’s share with you how we step on pits and fill in pits. This article will use FLIP-95 as an example. 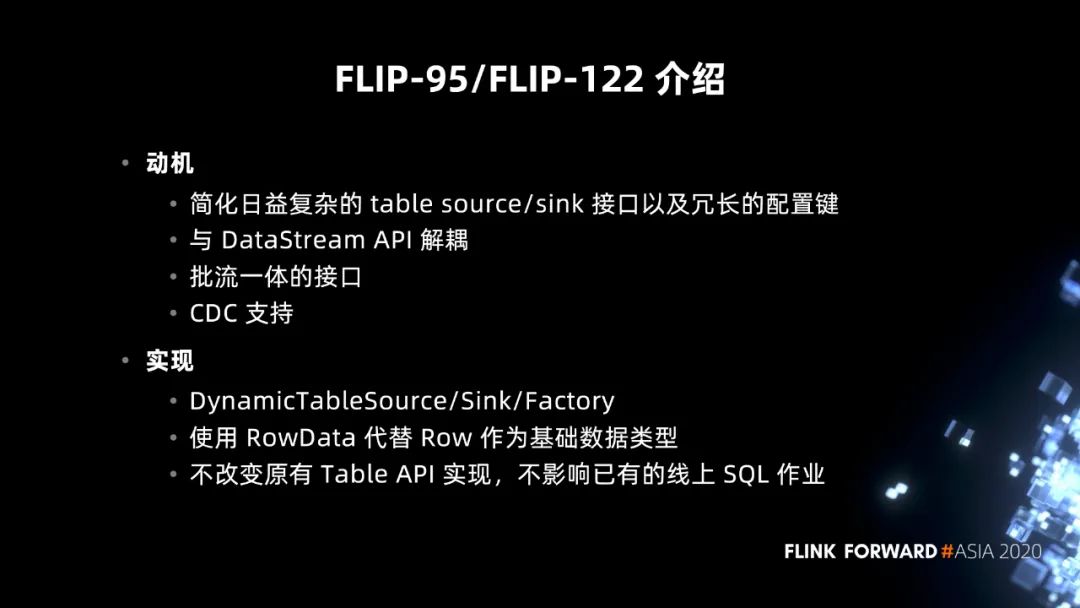 FLIP-95 is a new Table API with similar motivations to FLIP-27, which is also to achieve a batch-flow integrated interface, while also better supporting CDC integration. For the lengthy configuration keys, the corresponding FLIP-122 is also proposed to simplify the configuration key setting. 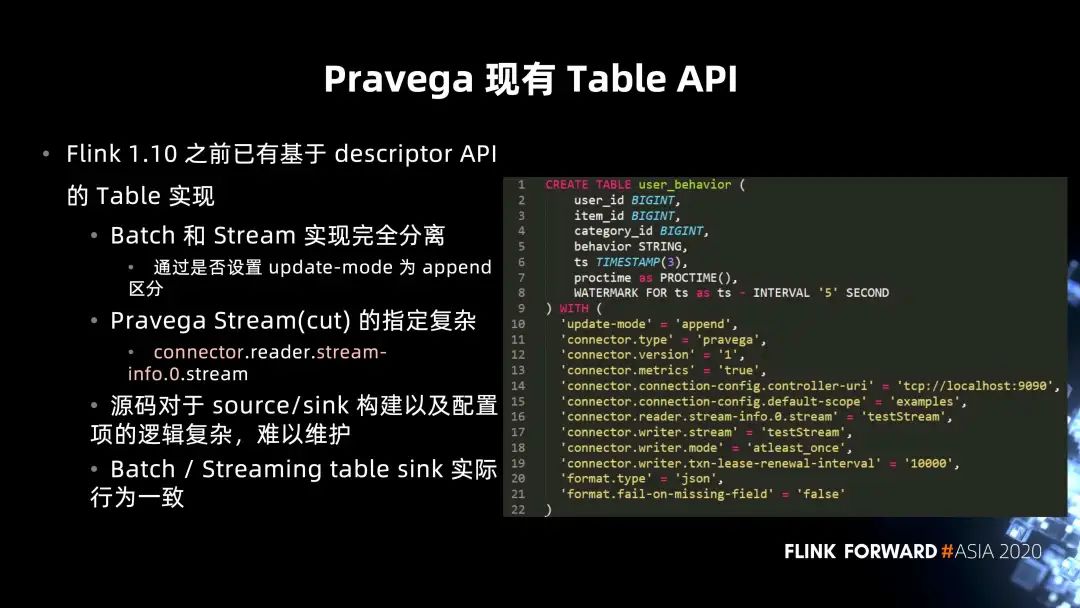 From the image above, you can see

Pravega’s Table API before Flink 1.10, and from the DDL of the table in the figure, you can see that

> Use update mode and append to distinguish between batch and stream, and the distinction between batch stream data is not intuitive.

In response to these problems, we also have a great incentive to implement such a new set of APIs, allowing users to better use table abstractions. The entire framework is shown in the figure, and with the help of the entire new framework, all configuration items are defined through the ConfigOption interface and managed centrally in the PravegaOptions class.

The following figure shows the implementation of the latest Table API table building, which is very simplified compared with the previous one, and there are many optimizations in terms of functions, such as the configuration of enterprise-level security options, the specified function of multiple streams and starting streamcuts. 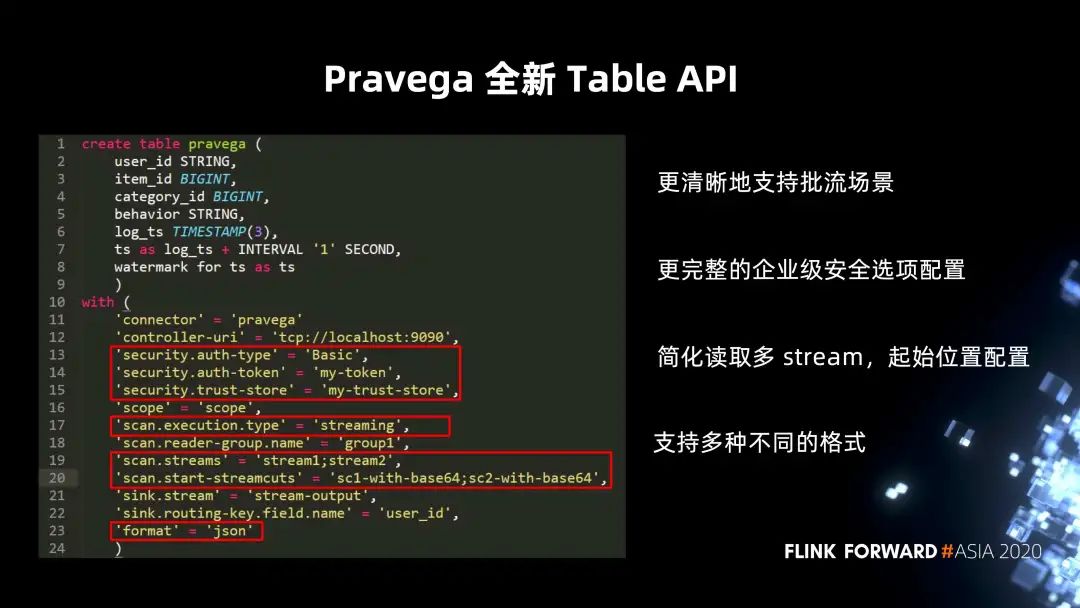 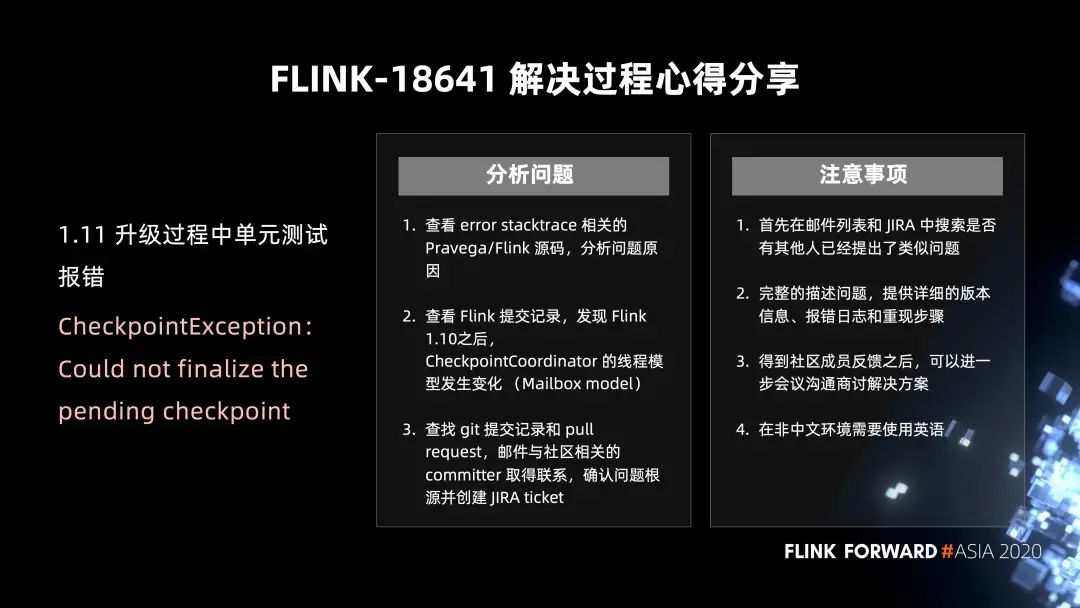 Next, I would like to share here a small experience of Flink 1.11 integration, which is about an issue resolution process. Flink-18641 is an issue we encountered when integrating version 1.11.0. During the upgrade process, a CheckpointException is reported in the unit test. Next is our complete debug process.
We have also summarized the following considerations for our compatriots in the open source community:

> Search the mailing lists and JIRA for anyone else who has asked a similar question;

In fact, as a developer in China, there are in addition to mailing lists and JIRA. We also have DingTalk groups and videos to contact a lot of Committers. In fact, it is more of a process of communication, doing open source is to communicate with the community more, which can promote the common growth between projects. 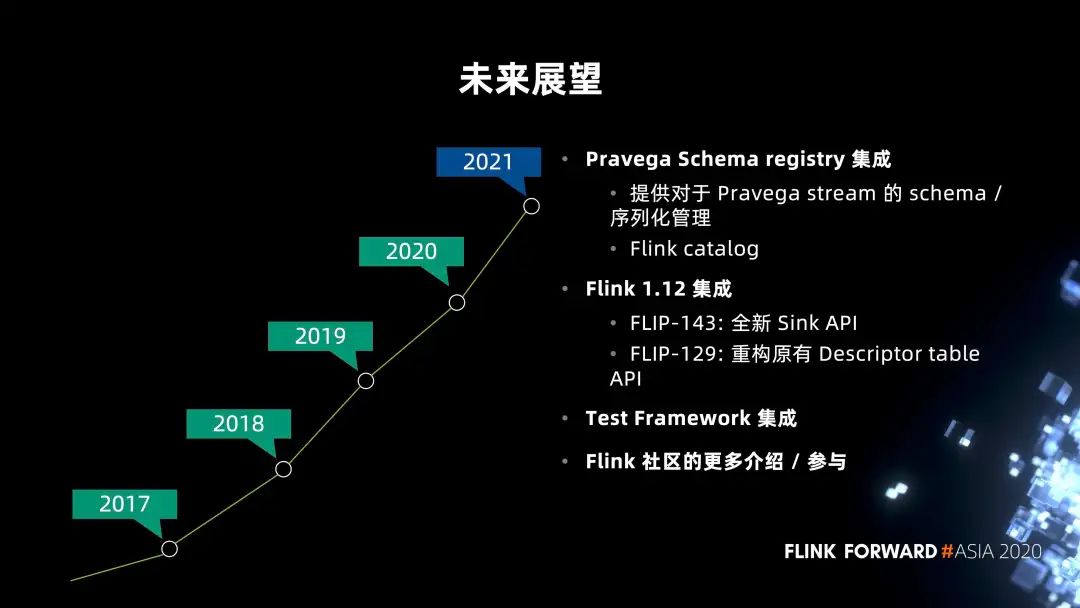 Finally, I also hope that the community can pay more attention to the Pravega project and promote the common development of Pravega connector and Flink.
Registration for the Pravega Maker Contest by Dell Technologies will open on July 15 and officially open on August 13. The competition aims to bring together developers, designers and entrepreneurs to discuss with like-minded people how Pravega’s best features can be used to solve challenges and create valuable solutions.
👇 Scan the QR code to pay attention to the event details & competition judging criteria 👇 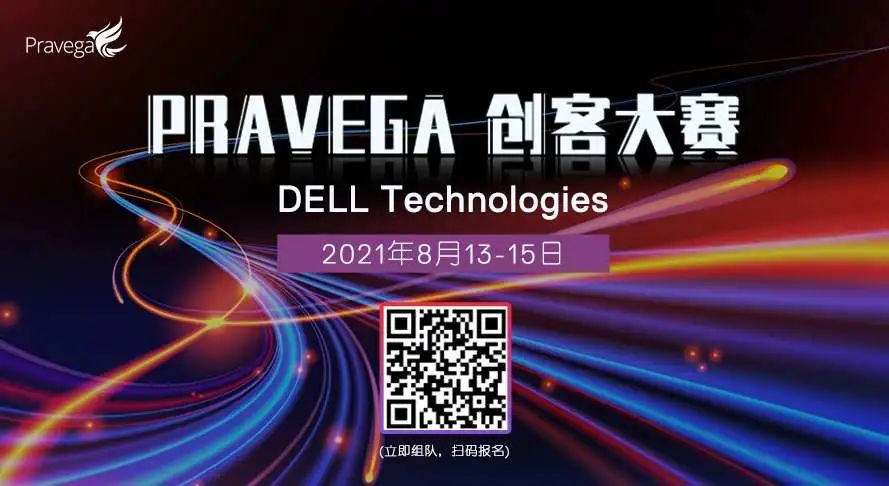 For more technical questions related to Flink, you can scan the code to join the community DingTalk communication group~ 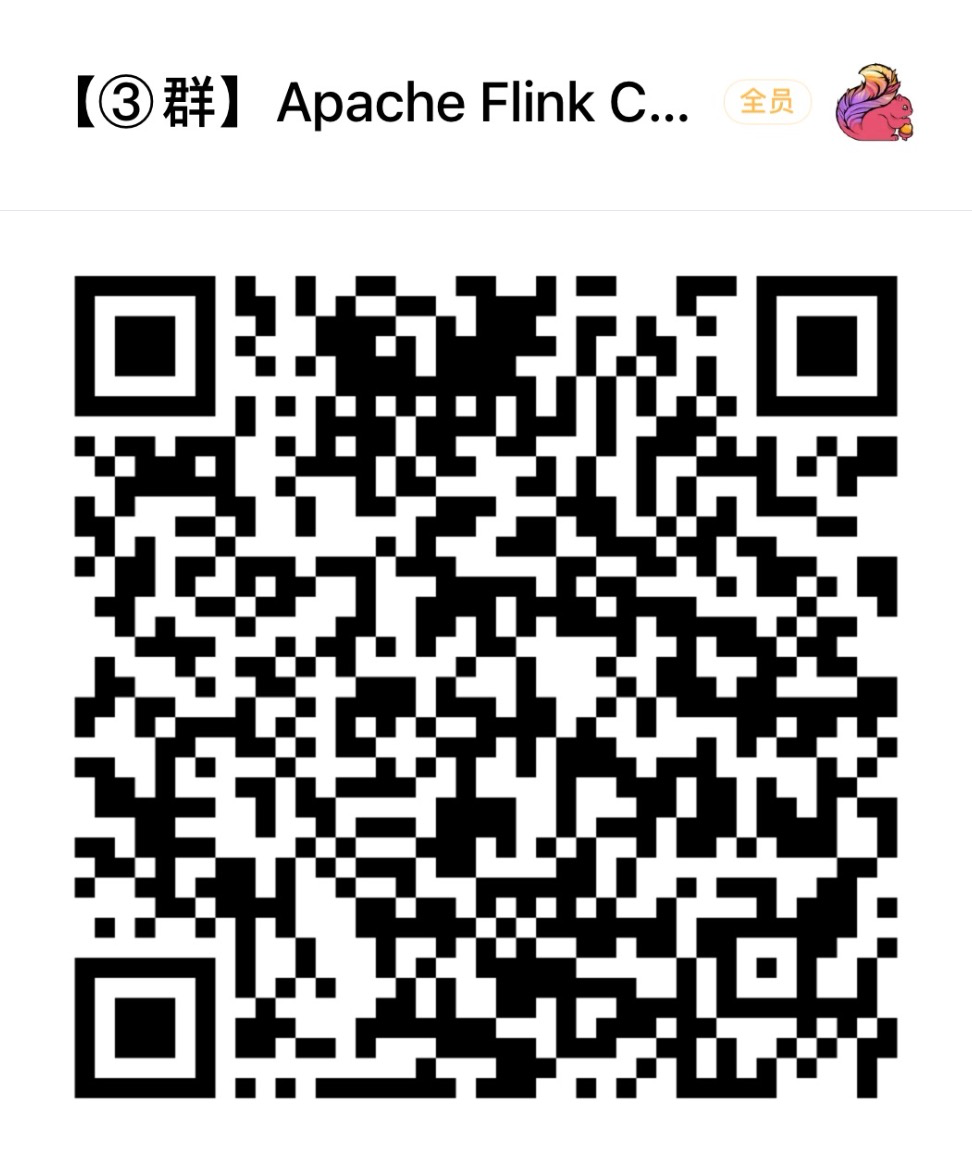 poke me , view the original video~