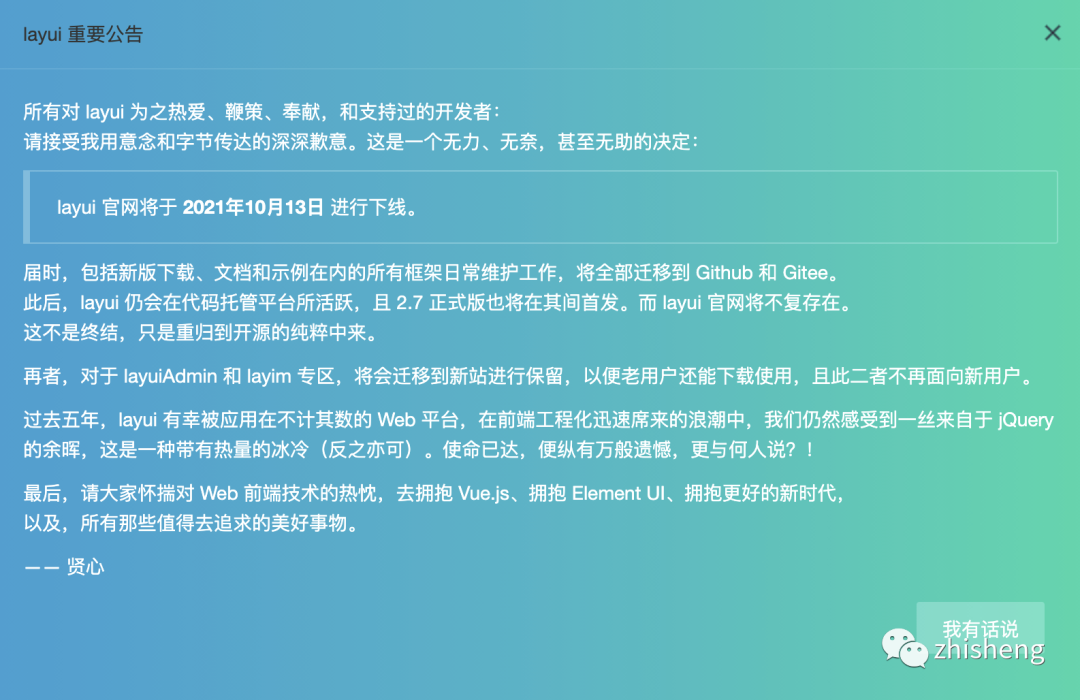 Perhaps, some people will say that the notice also said, “new version downloads, documentation and examples, etc. will still be on Github and Gitee

but the so-called “people go tea cool”, the focus of the original author’s work in the later stage, will definitely dilute LayUI development.

We can see from the notice from LayUI that the original author said that “in the wave of front-end engineering, we still feel a trace of the afterglow from jQuery, encouraging everyone to embrace Vue.js and embrace Element UI.” “

Yes, now even JQuery is glorious away, let alone Layui, does this herald the end of an era? 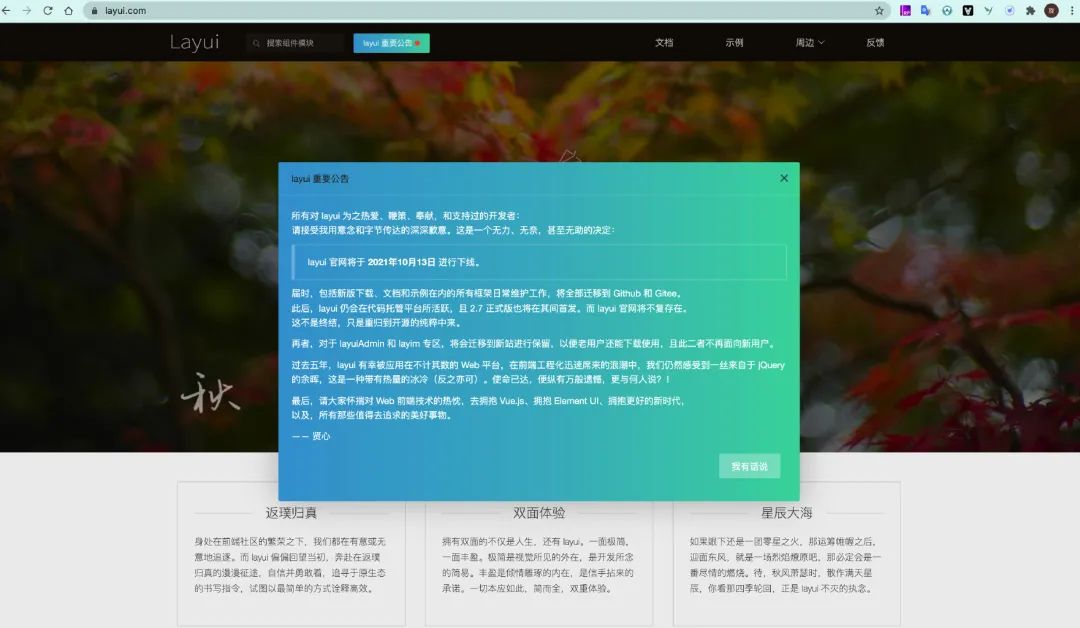 The characteristics of LayUI are tough and alive

under the siege of vue, react, angular, and giants like ant design, elementUI and so on,

and naturally have their unique characteristics.

As the original author said, LayUI was originally made for back-end developers.

For example, a static table, basically without modifying the existing code, just add class=”layui-table”, it can immediately show a beautiful interface.

This is simply a boon for the back-end developers.

More specifically, when you use the ASP.NET Gridview control, you basically just need to add class=”layui-table” to achieve professional aesthetic results on the UI.

This is different from the UI design concept of Ant Design, where you need to import/export various JS packages. 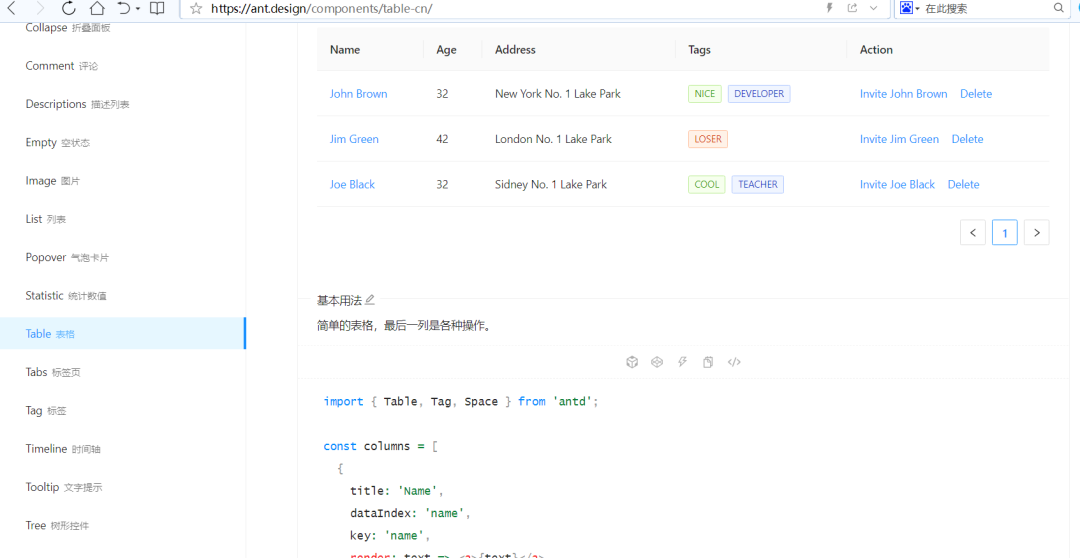 The original author said: the formation of visual fatigue is often due to the numbness formed by too rich or too single colors, and the colors provided by layui are fresh and deep, soft to each other, not too stimulating the neural response of the cerebral cortex, forming a subtle image that is more durable the longer it lasts. Mix and match well to avoid contradictory changes with a variety of websites, so that your web platform looks more cohesive.

like the layout of Layui very much, especially suitable for back-end projects, and when I make Daystar software, basically the back-end uses the Layui framework. 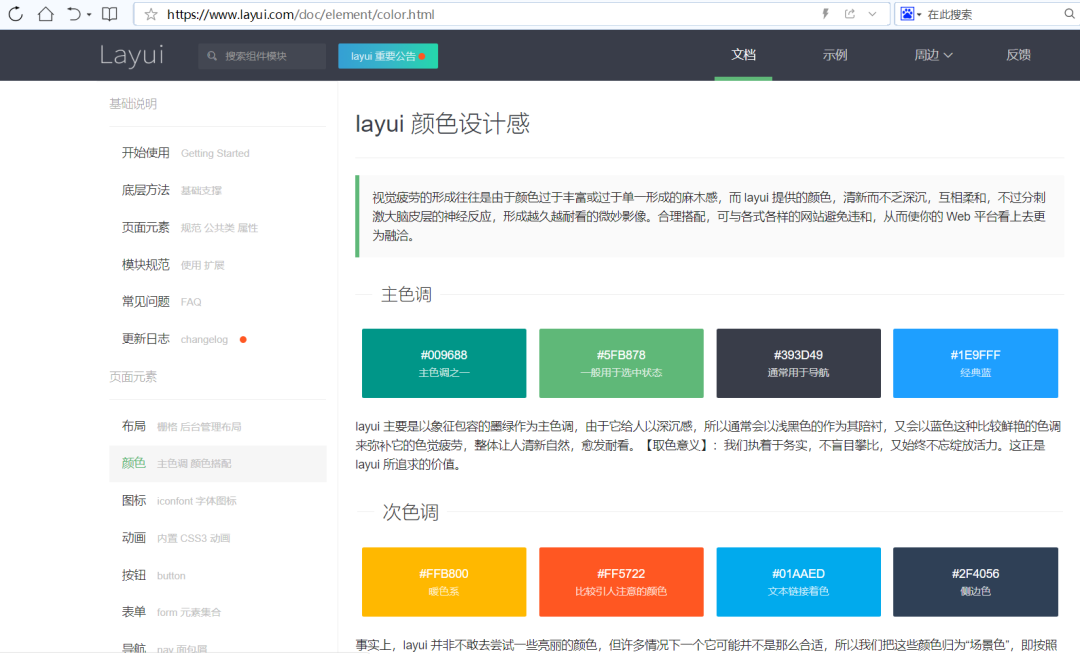 If you simply compare the difference between Layui and LayAdmin, layui is like tires, car cover, steering wheel, he is a separate component.

Layadmin is like a car, he assembles the components of Layui into a car as a semi-finished product (because the data is static).

The biggest “attack” or “

ridicule” of layui is that his module is “four likes”, he is neither CMD (Common Module Definition) nor AMD (Asynchronous Module Definition), or it may be for historical reasons, in itself, solving closures in JavaScript has always been a tricky problem. Also, prior to ES6, Javascript itself did not support import/export.

So, layui defines its own way of writing. However, this writing is really simple to apply.

In terms of data binding, it is also more troublesome. In addition, the support for mobile is not very good.

Therefore, LAYUI is very suitable for the development of enterprise applications.

Although the reason for the closure of layui is not very clear to us.

However, we can still guess that one of the biggest reasons for the closure of layui is that the original author is tired, really tired.

layadmin provides two versions, one in iframe mode and one in single page mode, which is too difficult.

At the same time, doing open source is not profitable (especially this previous framework, which is also difficult to encrypt), which may also be a reason for the author to close the site.

In fact, I also had an issue to advise her before, and it is also important to do a good job of commercialization.

There is no perfect product in the world, and when Layadmin is launched in due course, users are willing to buy it.

Anyway, thanks to the sage, we hope that layui will get better and better in the future.