Abstract: Alibaba technical expert Hu Zheng shared at Meetup in Shanghai on April 17, the content of the article is to use Flink and Iceberg to try to solve the challenges related to data entering the lake, and help business students focus on their own business challenges more efficiently. Topics include:

Tips: Click “Read Original” at the end of the article “ to view the original video~

https://github.com/apache/flink
welcome everyone to give Flink a thumbs up and send star~

First, the core challenge of data entering the lake

Real-time data entry into the lake can be divided into three parts, namely data sources, data pipelines, and data lakes (data warehouses), and the content of this article will expand around these three parts.

1. Case #1: A program bug causes data transfer to be interrupted

2. Case #2: Data changes are too painful

When data changes occur, it can bring great stress and challenges to the entire link. In the following figure, a table originally defined two fields, ID and NAME. At this time, the business students said that they need to add the address to facilitate better mining the value of users.

First, we need to add a column Address to the Source table, then chain the link to Kafka, then modify the job and restart. Then the entire link has to be changed all the way, new columns are added, jobs are modified and restarted, and finally all the data in the data lake (data warehouse) is updated to achieve new columns. This process is not only time-consuming, but also introduces the problem of how to ensure the isolation of data so that the reading of analysis jobs will not be affected during the change process.

As shown in the figure below, the table in the data warehouse is partitioned in “months”,

and now you want to change to “days” for partitioning, which may require updating all the data of many systems, and then partitioning with new policies, which is very time-consuming.

When the business needs more real-time reports, it is necessary to change the import cycle of the data from “days” to “hours” or even “minutes”, which may cause a series of problems.

As shown in the figure above, the first problem is that the number of files is growing at a rate visible to the naked eye, which will put more and more pressure on the system outside. The pressure is mainly reflected in two aspects:

investigate various systems in Hadoop and find that the entire link needs to run fast, well, stable, and have good concurrency, which is not easy.

5. The core challenges faced by data entering the lake

> does not allow near real-time analysis of CDC data

The most critical reason for Netflix to do Iceberg is to solve the pain points of Hive cloud migration, and the pain points are mainly divided into the following three aspects:

■ Pain point 3: Too many details

> the stream batch unification of storage 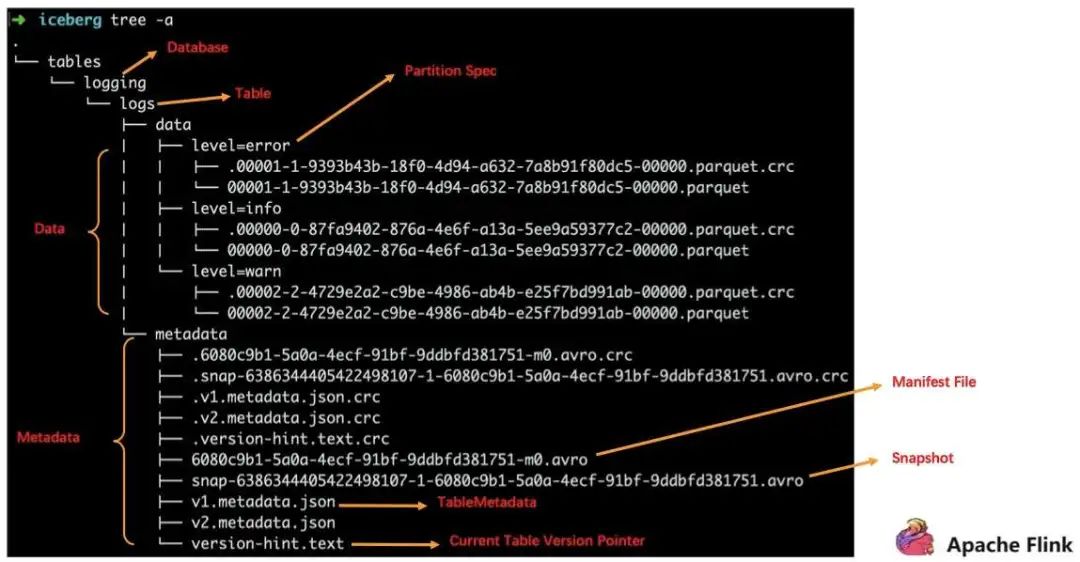 Above is a standard Iceberg TableFormat structure, the core is divided into two parts, one is Data, one is Metadata, either part is maintained on top of S3 or HDFS.

shown above Iceberg’s write and read flow approximately.
You can see that there are three layers in this:
Each write results in a batch of files, one or more manifests, and snapshots.
For example, the first snapshot Snap-0 is formed, the second snapshot Snap-1 is formed, and so on. However, when maintaining the original data, additional maintenance is done step by step.
This can help users do batch data analysis on a unified storage, and can also do incremental analysis between snapshots based on storage, which is why Iceberg can do some support in the reading and writing of streams and batches.

The picture above shows some of the companies currently using Apache Iceberg, and the domestic example is more familiar to everyone, here is a general introduction to the use of foreign companies.

> First, the entire iCloud data platform is built on Iceberg;

How Flink and Iceberg solved the problem

Going back to the most critical point, let’s explain how Flink and Iceberg solved a series of problems encountered in Part 1.

1. Case #1: A program bug causes data transfer to be interrupted 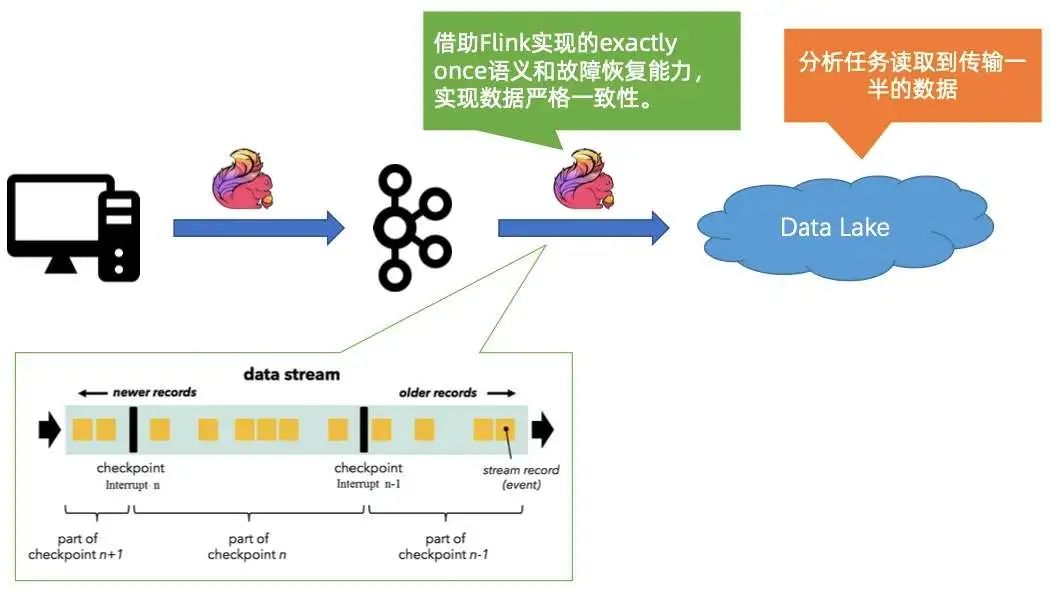 First of all, Flink is used for synchronous links, which can ensure exactly once semantics, and when the job fails, it can do strict recovery to ensure data consistency. 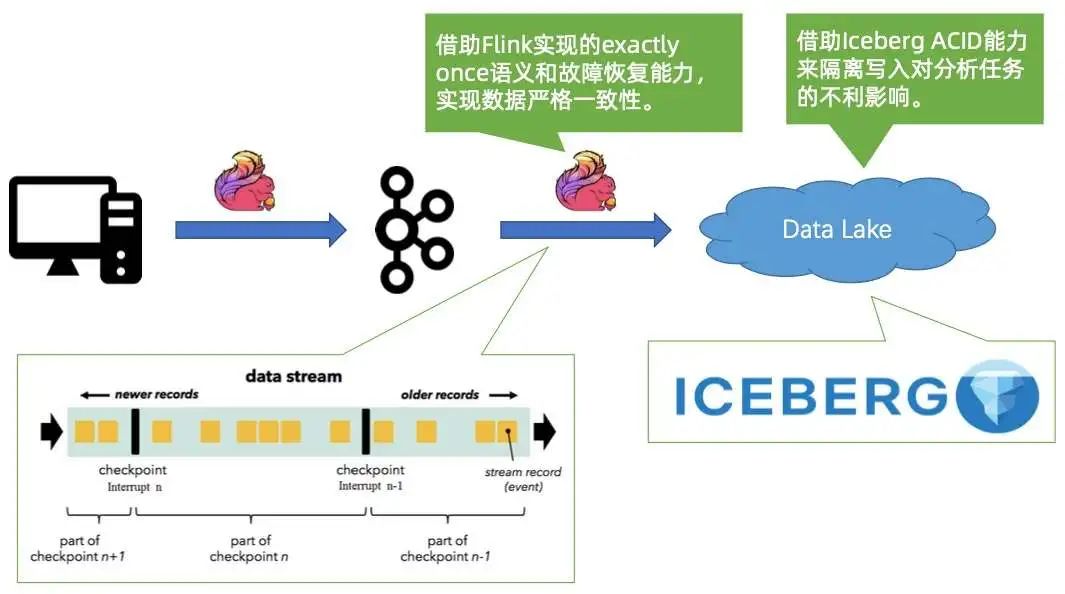 The second is Iceberg, which provides rigorous ACID semantics that can help users easily isolate the adverse effects of writes on analysis tasks.

2. Case #2: Data changes are too painful

As shown above, when data changes occur, Flink and Iceberg can solve this problem.
Flink can capture the upstream schema change event, and then synchronize this event to the downstream, after synchronization, the downstream Flink directly forwards the data down, forwards it to storage, and Iceberg can change the schema instantly.
When doing DDL such as Schema, Iceberg directly maintains multiple versions of the schema, and then the old data source is completely unchanged, and the new data writes a new schema to achieve one-click schema isolation.

Another example is the problem of partition changes, as shown in the image above.

If you want to change to partition by “day”, you

can directly change the partition with one click, the original data remains unchanged, and the new data is all partitioned by “day”, semantics to achieve ACID isolation.

The third problem is the strain that small files put on the metastore.
First of all, for Metastore, Iceberg is to store the original data in the file system and then maintain it in the form of metadata. The whole process actually removes the centralized metastore and only relies on file system extensions, so the scalability is better.

Another problem is that there are more and more small files, resulting in slower and slower data scanning. Flink and Iceberg offer a series of solutions to this problem:

the first solution is to optimize the problem of small files at write time, and shuffle according to

For this problem, Flink can

identify different types of events well at the Engine level, and then with the help of Flink’s exactly once semantics, even if it encounters a failure, it can automatically recover and process.

After using the Flink and Data Lake solutions, you only need to write a source table and sink table, and then an INSERT INTO, and the entire link can be opened without writing any business code.

> and finally how the storage plane supports near real-time CDC data analysis. 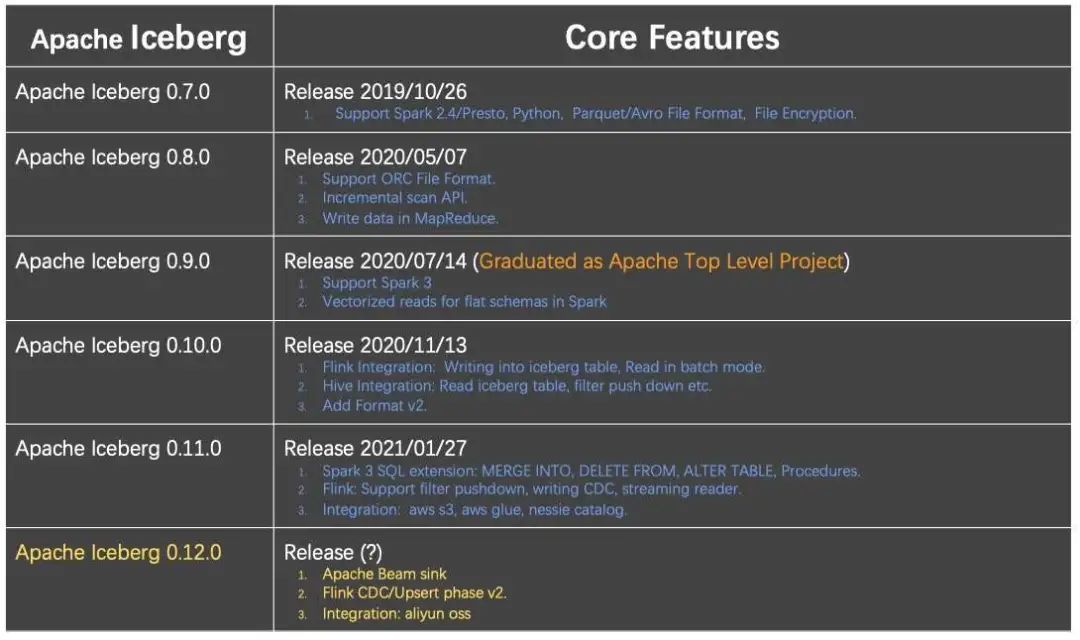 The picture above is Iceberg’s Roadmap, you can see that Iceberg only released one version in 2019, but directly released three versions in 2020, and became a top-level project in version 0.9.0.

The picture above shows Flink and Iceberg’s roadmap, which can be divided into 4 stages.