Operation scenario
Flink relies on memory computing, and the lack of memory during the calculation process has a great impact on the execution efficiency of Flink. You can monitor the GC (Garbage Collection), evaluate the memory usage and remaining conditions, determine whether the memory has become a performance bottleneck, and optimize according to the situation.
Monitor the YARN container GC logs of node processes, and optimize GC if full GC occurs frequently.
GC configuration: In the “conf/flink-conf.yaml” configuration file of the client, add the parameter to the “env.java.opts” configuration item

causes data skew, you need to consider optimizing partitioning. Avoid non-parallelism operations, some operations on DataStream can result in no parallelism, such as WindowAll. keyBy tries not to use Strings.
The

parallelism of the operation scenario controls the number

of tasks, which affects the number of blocks that the data is divided into after the operation. Adjust the degree of parallelism so that the number of tasks and the data processed by each task are optimized with the processing power of the machine. View CPU usage and memory usage, when tasks and data are not evenly distributed among nodes, but concentrated on individual nodes, you can increase the degree of parallelism to make tasks and data more evenly distributed among nodes. Increase the parallelism of tasks and make full use of the computing power of the cluster machine, and the general parallelism degree is set to 2-3 times the sum of the number of cluster CPU cores.

The degree of parallelism of

can specify the default degree of parallelism for

the number of TaskManagers

3. Configure the number of TaskManager

slots
Each TaskManager multiple cores can run multiple tasks at the same time, which is equivalent to increasing the concurrency of tasks. However, since all cores share the memory of the TaskManager, it is necessary to balance the memory and the number of cores.

The memory of TaskManager is mainly used for task execution, communication, etc. When a task is large, it may require more resources, so the memory can be increased accordingly.

scenario
is reasonably designed and partitioned, and the task sharding can be optimized. In the process of program writing, it is necessary to partition evenly as much as possible, so that the data of each task is not skewed, and the entire task is not executed due to the long execution time of a task.
The
following are several partitioning methods
Operation scenario
Flink communication mainly relies on netty network, so in the process of Flink application execution, netty settings are particularly important, the quality of network communication directly determines the speed of data exchange and the efficiency of task execution.
The following configurations can be modified and adapted in the client’s “conf/flink-conf.yaml” configuration file, the default is already a relatively good solution, please modify it carefully to prevent performance degradation.
“taskmanager.network.netty.num-arenas”: The default is “taskmanager.numberOfTaskSlots”, which indicates the number of netty’s domains.
“taskmanager.network.netty.server.numThreads” and “taskmanager.network.netty.client.numThreads”: the default is “taskmanager.numberOfTaskSlots”, Represents the number of threads setting on the client and server side of netty.
“taskmanager.network.netty.client.connectTimeoutSec”: The default is 120s, which indicates the timeout for the taskmanager’s client connection.

When the data is

skewed (a certain part of the data is particularly large), although there is no GC (Gabage Collection), the task execution time is seriously inconsistent.

1. What is checkpoint Simply put, Flink

periodically persists the state in order to achieve fault tolerance and exactly-once semantics, and this persistence process is called checkpoint, which is a snapshot of the global state of Flink Job at a certain time.
When we want to implement a global state preservation function for the distributed system, the traditional scheme will introduce a unified clock, broadcast to each slaves node through the master node in the distributed system, and when the nodes receive this unified clock, they record their current state. 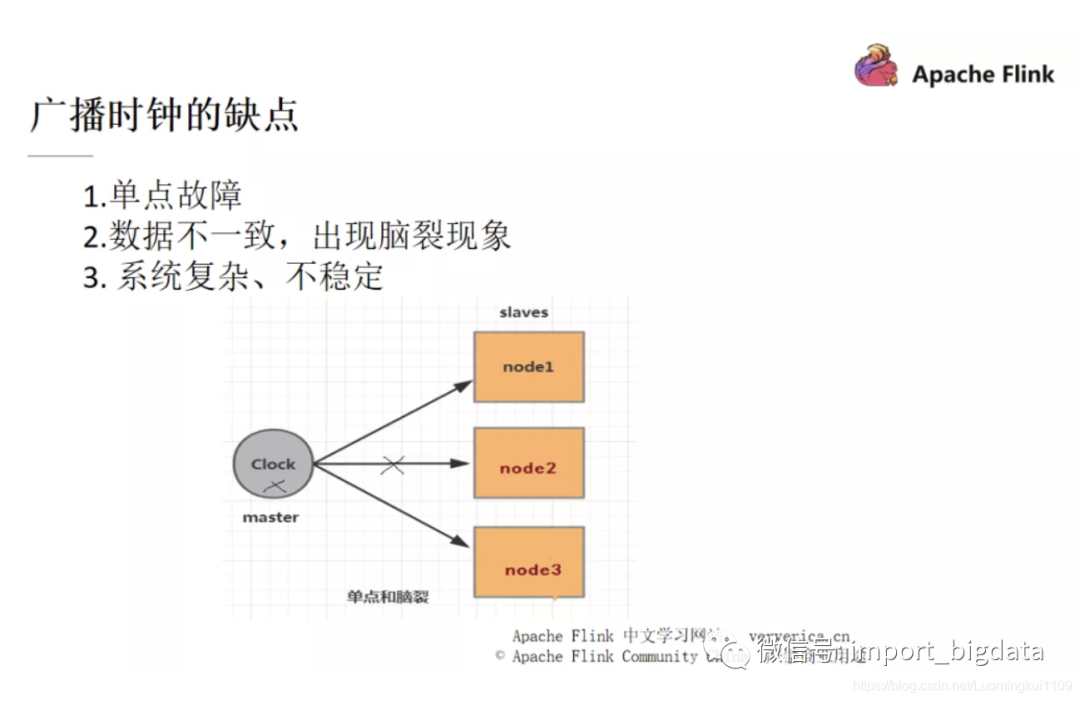 However, there are also certain problems in the way of unifying the clock, a certain node GC time is relatively long, or the master and slaves network at that time there are fluctuations that cause clock transmission delay or transmission failure, which will cause the slave and other machines to have data inconsistencies and eventually lead to brain splitting. If we want to solve this problem, we need to do HA (High Availability) for master and slaves. However, the more complex a system is, the more unstable and costly it is to maintain.
Flink puts all the checkpoints into a stream called Barrier. 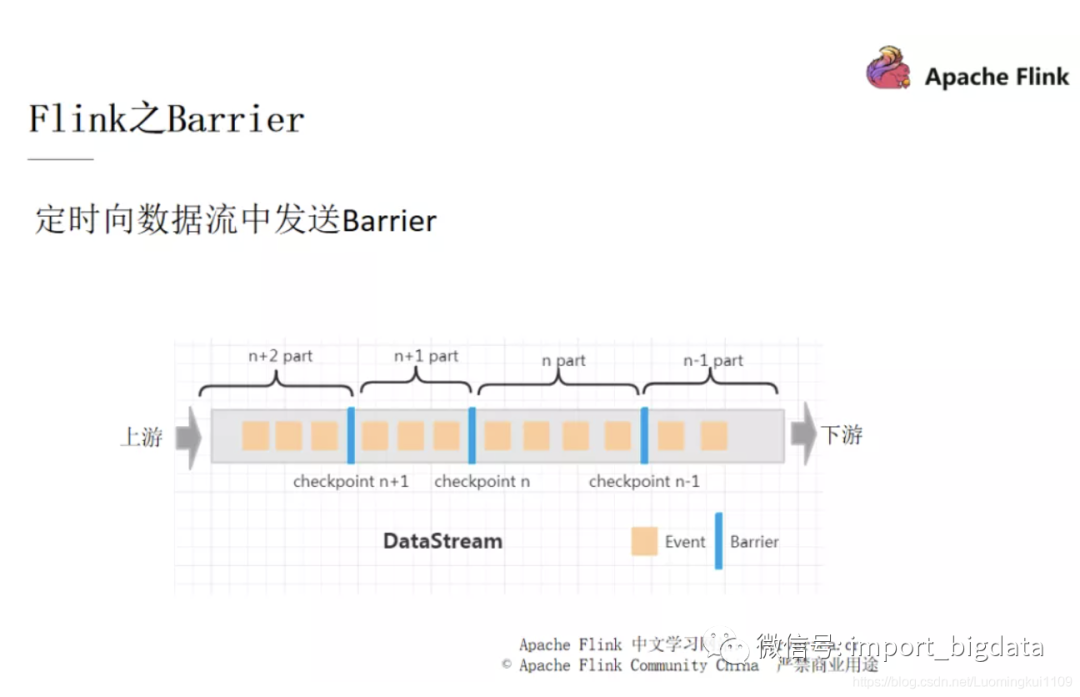 The above figure is an example of a barrier, from the first task upstream to the last task downstream, every time the task passes through the blue fence in the figure, the save snapshot function will be triggered. Let’s illustrate it briefly with an example.
2. Case study 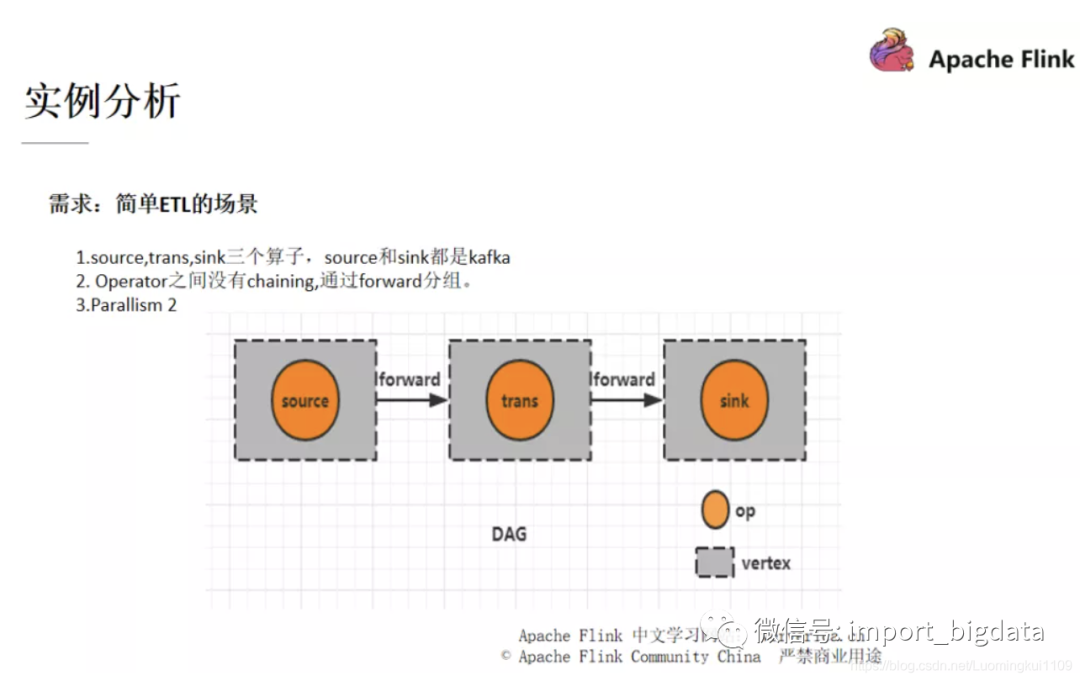 This is a simple ETL process, first we take the data from Kafka for a trans conversion operation, and then send it to a downstream Kafka.
In this example, no chaining tuning is performed. So at this time, the forward strategy is used, that is, “the output of a task is only sent to one task as input”, which also has the advantage that if both tasks are in a JVM, unnecessary network overhead can be avoided.
Set Parallism to 2, the DAG diagram is as follows:
■ CK analysis process 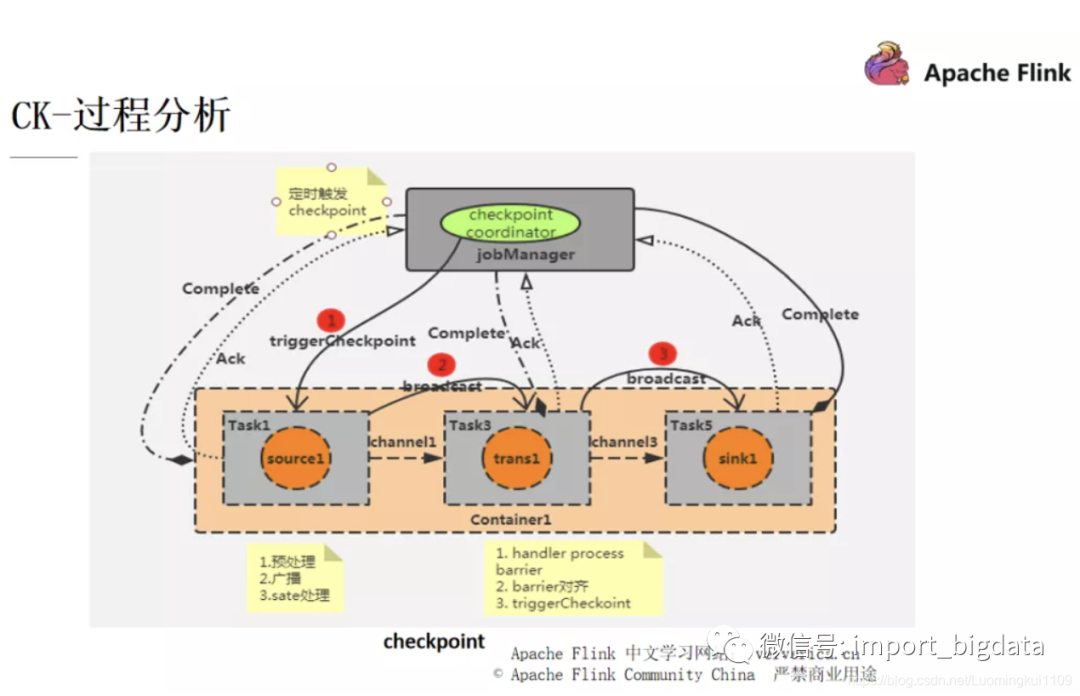 Every Flink job will have a JobManager, and there will be a checkpoint coordinator in the JobManager to manage the entire checkpoint process, we can set a time interval for the checkpoint coordinator to send a checkpoint event to each source task in the container. That is, the first task (corresponding to task1, task2 in the parallel graph).
When a Source operator receives a Barrier, it will suspend its own data processing, then make its current state into a snapshot (snapshot), save it to the specified persistent storage, and finally send an ack (Acknowledge character — confirmation character) asynchronously to the CheckpointCoordinator. At the same time, broadcast the barrier to all downstream operators and resume its own data processing.
Each operator continues to make a snapshot according to the above and broadcast it downstream until finally the Barrier is passed to the sink operator, at which point the snapshot is made. At this time, it should be noted that the upstream operator may be multiple data sources, and the corresponding multiple barriers need to be all aligned before triggering the checkpoint at one time, so when encountering a long checkpoint time, it may be caused by the data alignment taking a long time.
■ Snapshot & Recover 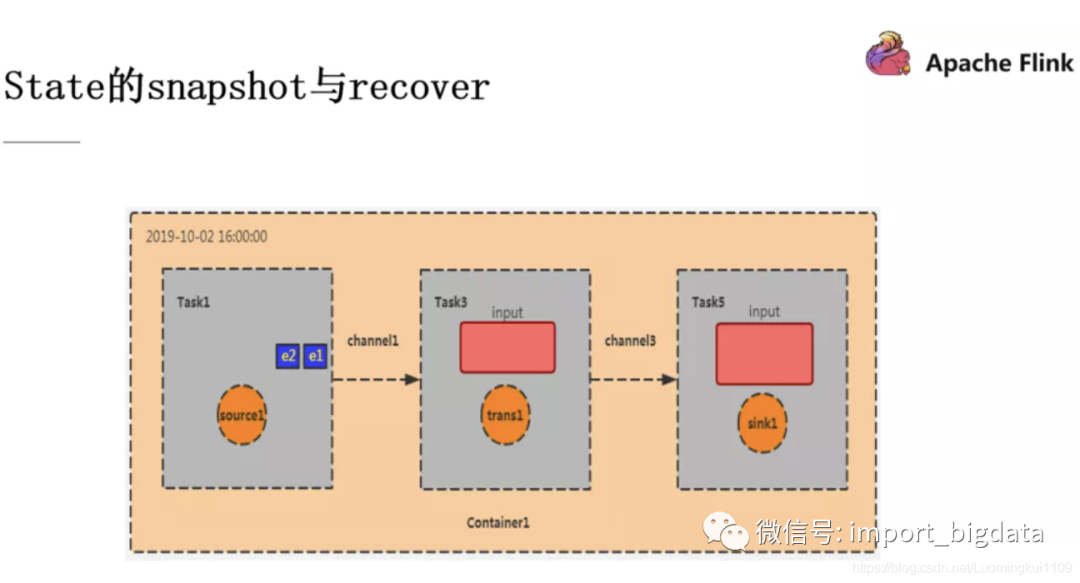 As shown in the figure, this is the initialization stage of our container container, e1 and e2 are the data that has just been consumed from Kafka, and at the same time, the CheckpointCoordinator also sends a barrier to it.

At this point, Task1 completes its checkpoint process, the effect is to record offset as 2(e1, e2), and then broadcast Barrier to the downstream operator, the input of Task3 is the output of Task1,

now suppose that the function of my program is the number of statistics, at this time the checkpoint effect of Task3 is to record the number of data as 2 (because from Task1 The data is e1 and e2), and then the barrier is broadcast down, and when the barrier is passed to the sink operator, the snapshot is completed.
At this time, a steady stream of data will be generated in the source and new checkpoints will be generated, but if the container is down and restarted, data recovery is required. In the checkpoint just completed, the offset is 2 and the count is 2, so we will restore according to this state. At this point, Task1 will start consuming from e3, which is the Recover operation.
■ Precautions for checkpoint 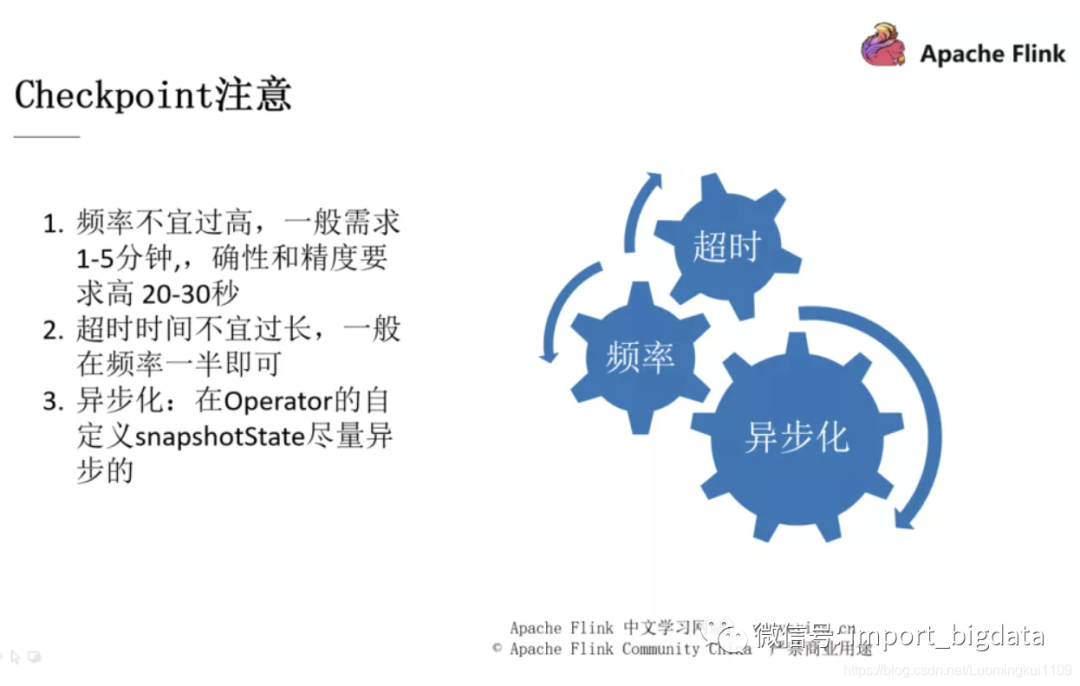 3 points to note below can affect the throughput of the system In the actual development process, it is necessary to pay attention to

The following content is a summary of the Flink Chinese community, for your reference: Flink

1. Problem location mantra
“one pressure, two checks and three indicators, delayed throughput is the core.” Always pay attention to the amount of resources, and look at the GC first. “

One pressure refers to back pressure,

when encountering problems, first look at the back pressure, the second check refers to the checkpoint, whether the time to align the data is very long, whether the state is very large, these are closely related to the system throughput, the three indicators refer to some of the display of Flink UI, our main focus is actually latency and throughput, system resources, and GC logs.

Look at the checkpoint duration 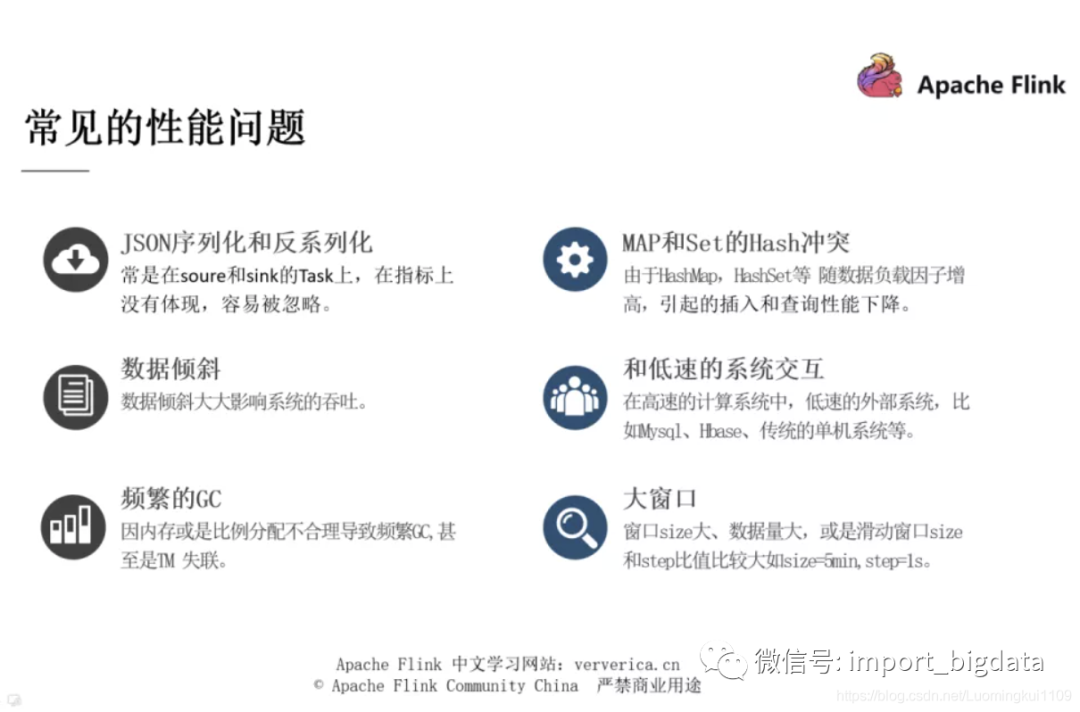 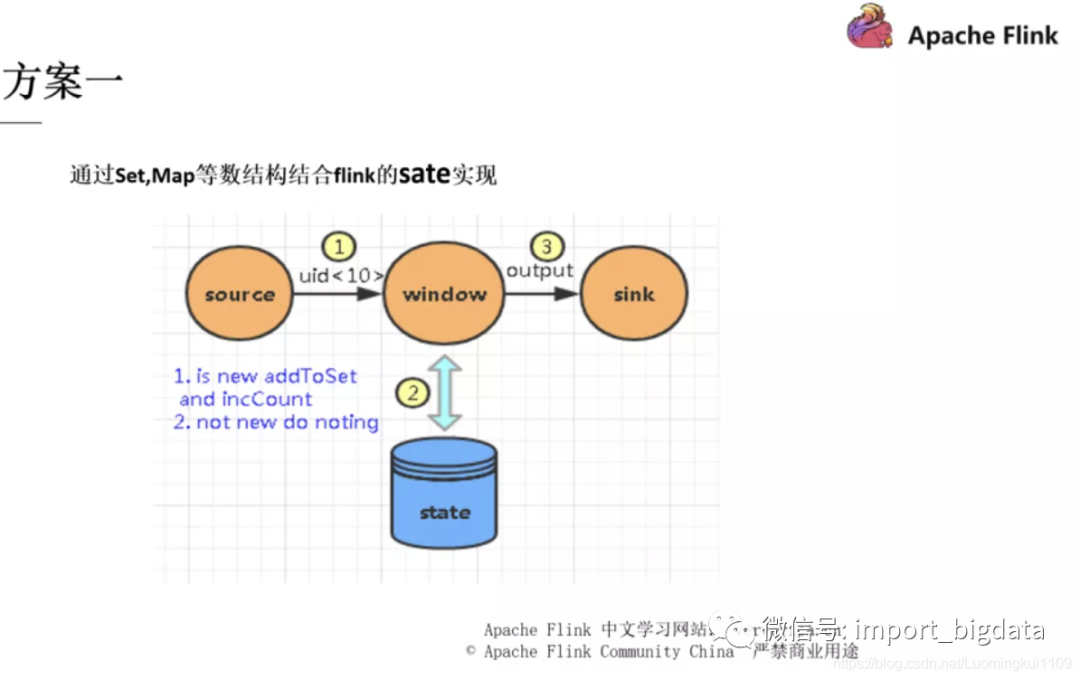 We can deduplicate some data structures, such as Set or Map, in combination with Flink state. However, these deduplication schemes will continue to increase with the amount of data, resulting in a sharp decrease in performance, such as the write performance problem caused by the hash collision we just analyzed, the GC problem caused by excessive memory, and the disconnection problem of TaskManger. 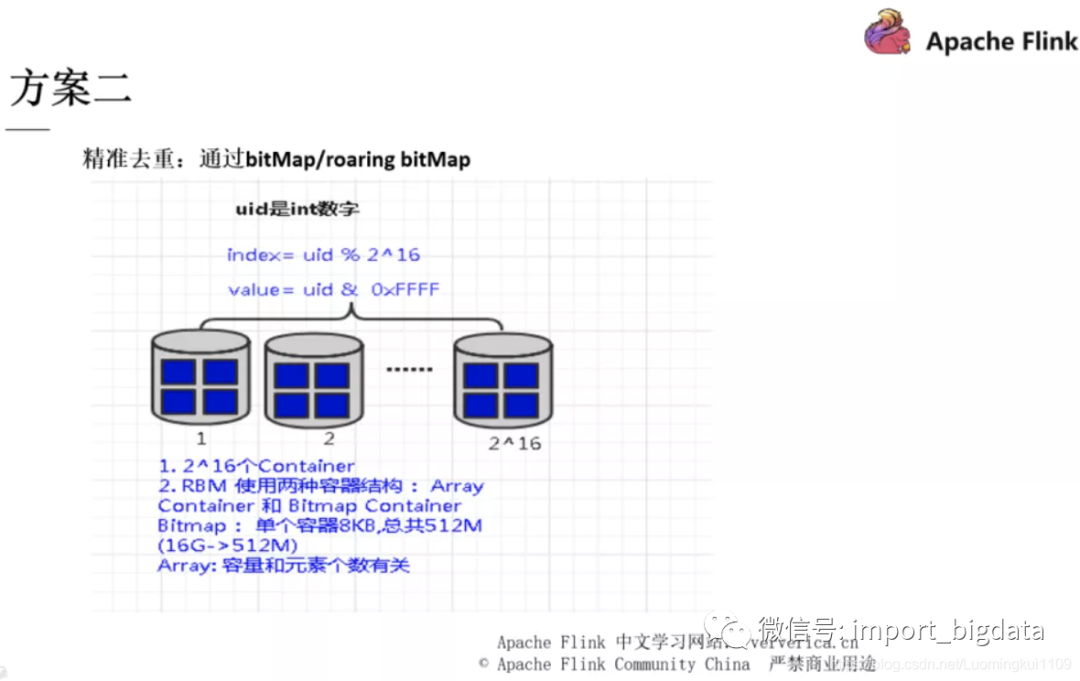 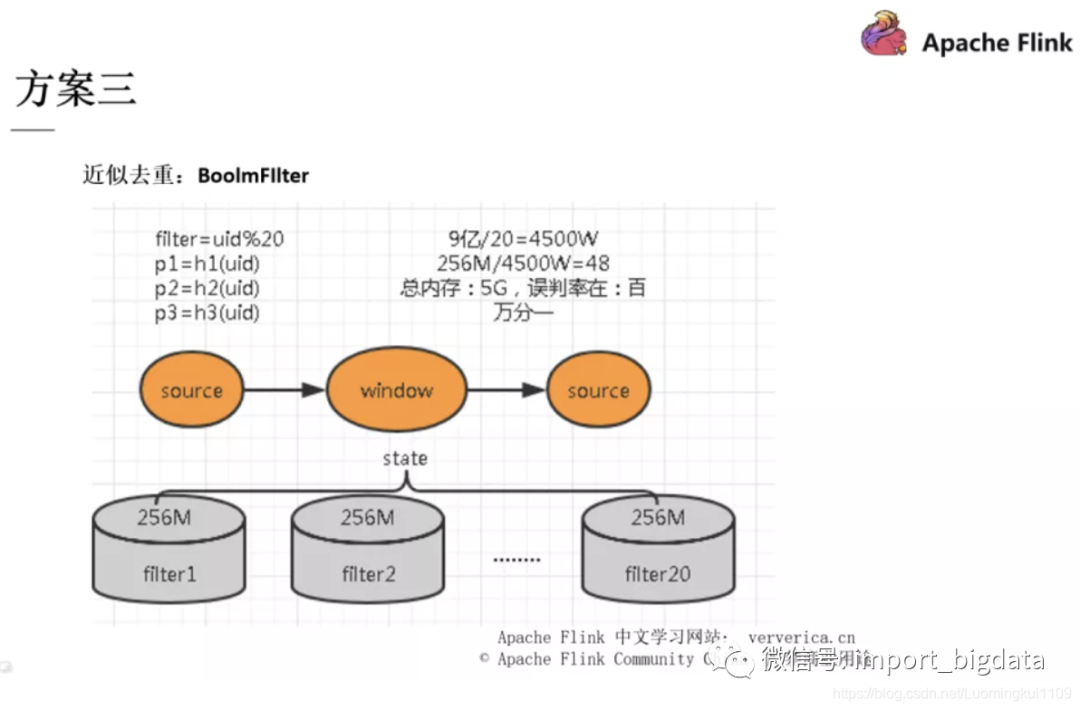 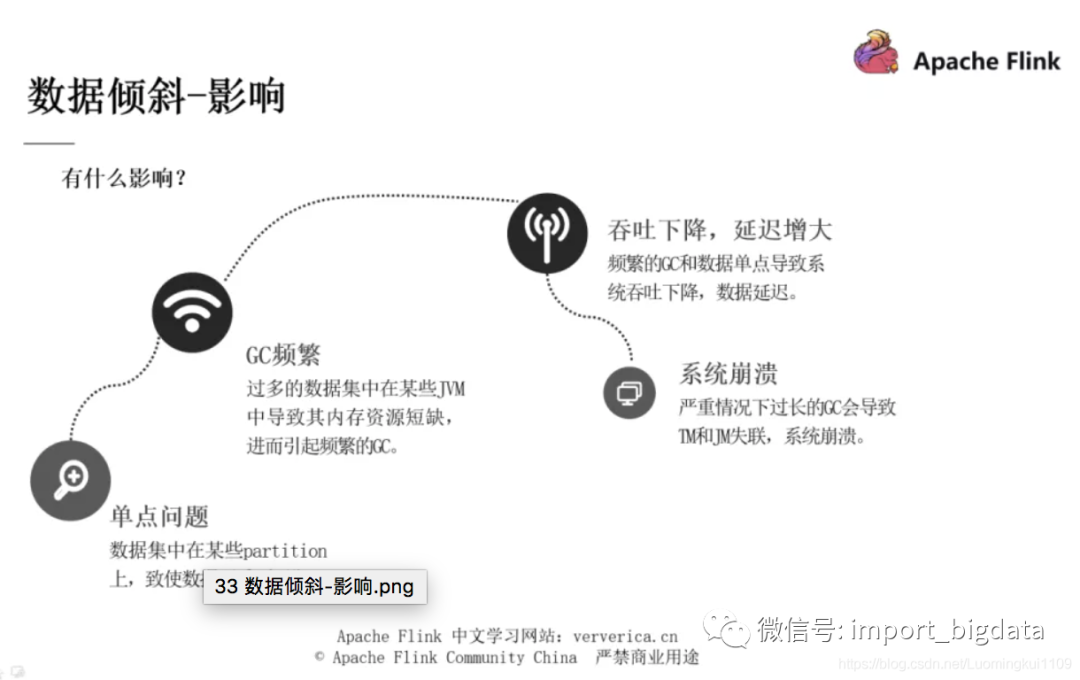 Scheme 2 and 3 are also deduplicated through some data structure means, and interested students can go down to understand it by themselves and will not expand it here.
■ Data tilt 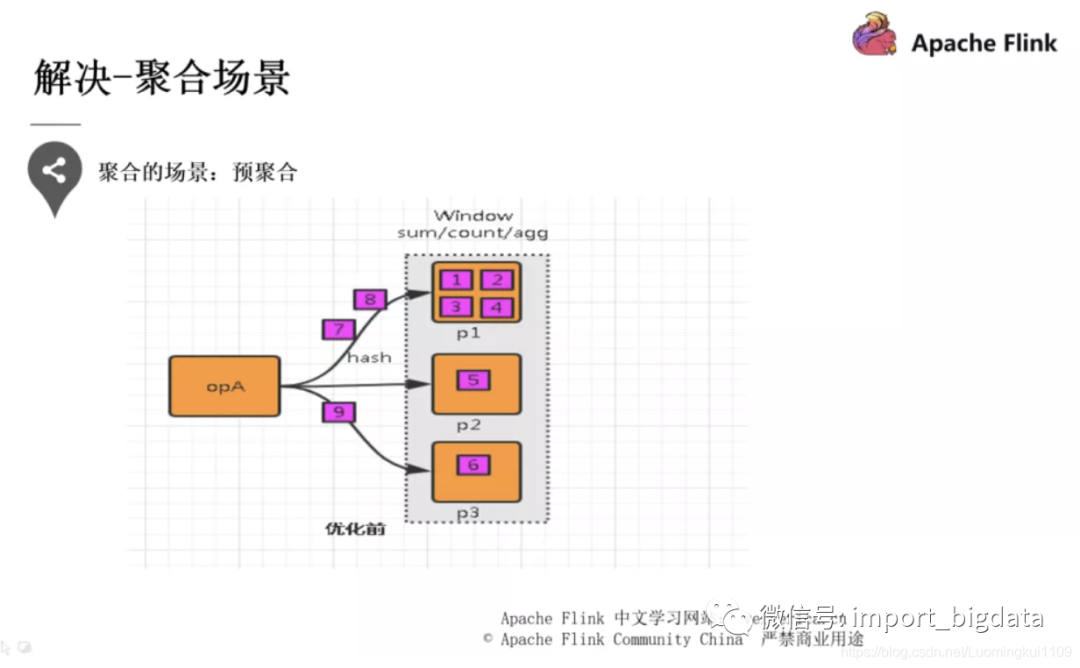 data skew is a high-frequency problem that everyone encounters , there are many solutions.
The first scenario is when our concurrency is set lower than the number of partitions, which will cause the above-mentioned uneven consumption. 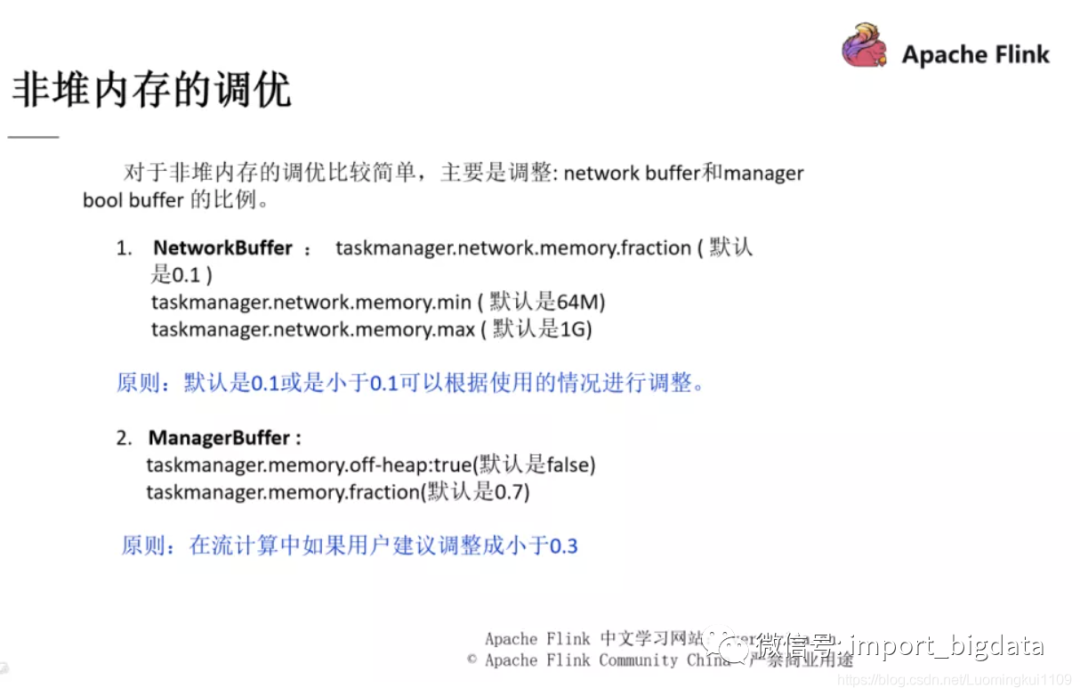 The second mentioned is the case where the keys are unevenly distributed, and their distribution can be broken up by adding random prefixes so that the data is not concentrated in several tasks.
Aggregate the same key locally on each node, similar to the local combiner in MapReduce. After map-side pre-aggregation, each node will only have one identical key locally, because multiple identical keys are aggregated. When other nodes pull the same key on all nodes, the amount of data that needs to be pulled is greatly reduced, thereby reducing disk IO and network transfer overhead.
■ Memory tuning

Flink’s memory structure has just been mentioned, so we know that the tuning aspect is mainly for non-heap memory Network buffer, manager pool and heap memory tuning, which are basically controlled by parameters.
We need to adjust these parameters according to our own situation, and here are only some suggestions. And for ManagerBuffer, Flink’s streaming jobs don’t use too much memory now, so we’ll all set it to be smaller than 0.3. 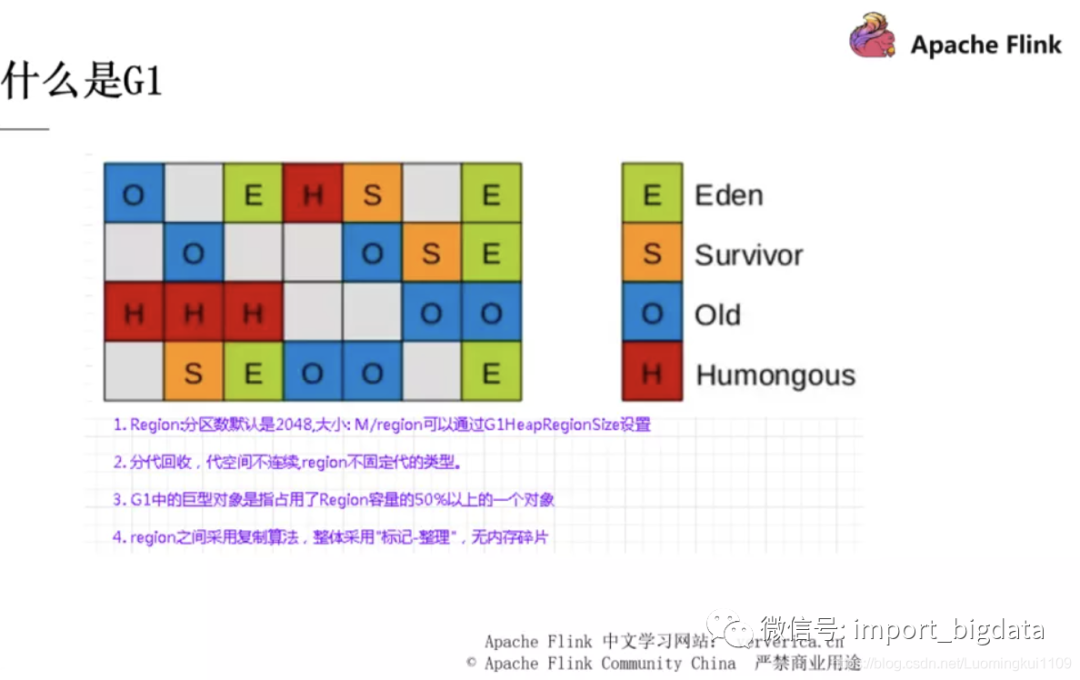 The tuning of heap memory is about the JVM, the main thing is to change the default garbage collector to G1, because the default Parallel Scavenge has a serialization problem for the old GC, its Full GC takes a long time, the following is some introduction to G1, there is a lot of information on the Internet, I will not expand it here. 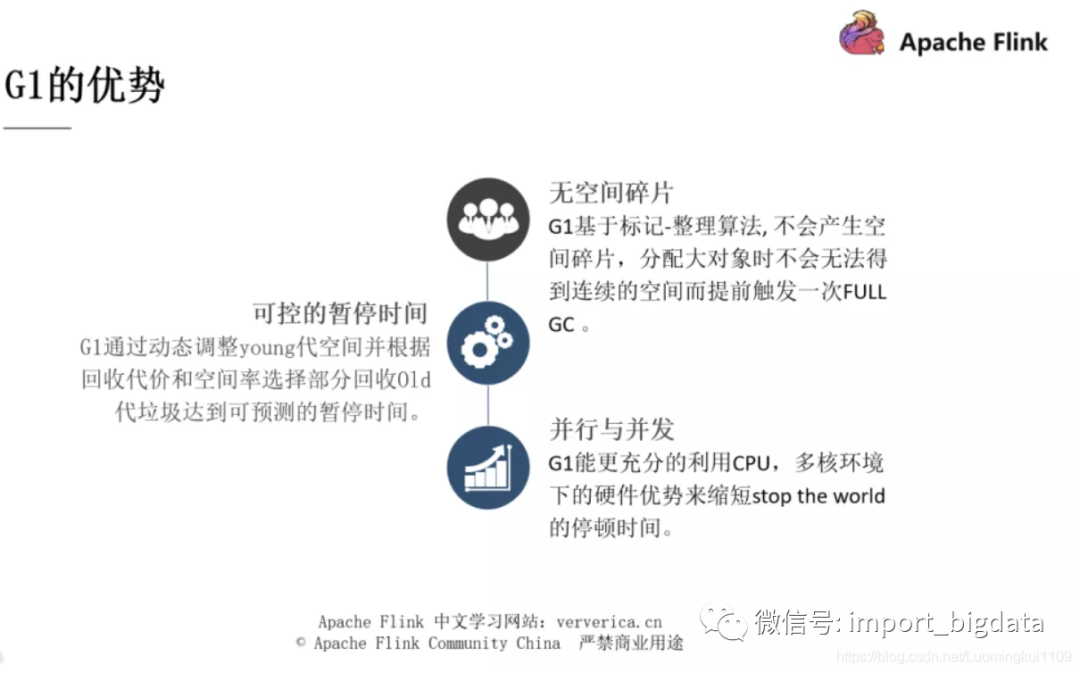 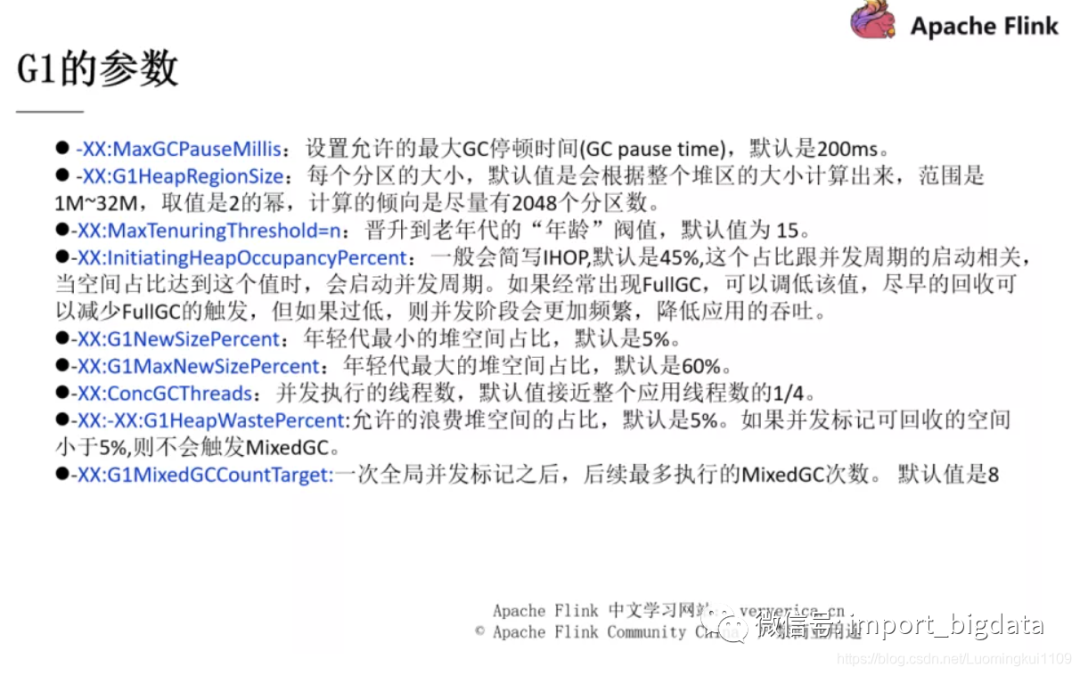 the tag is not clickable during preview